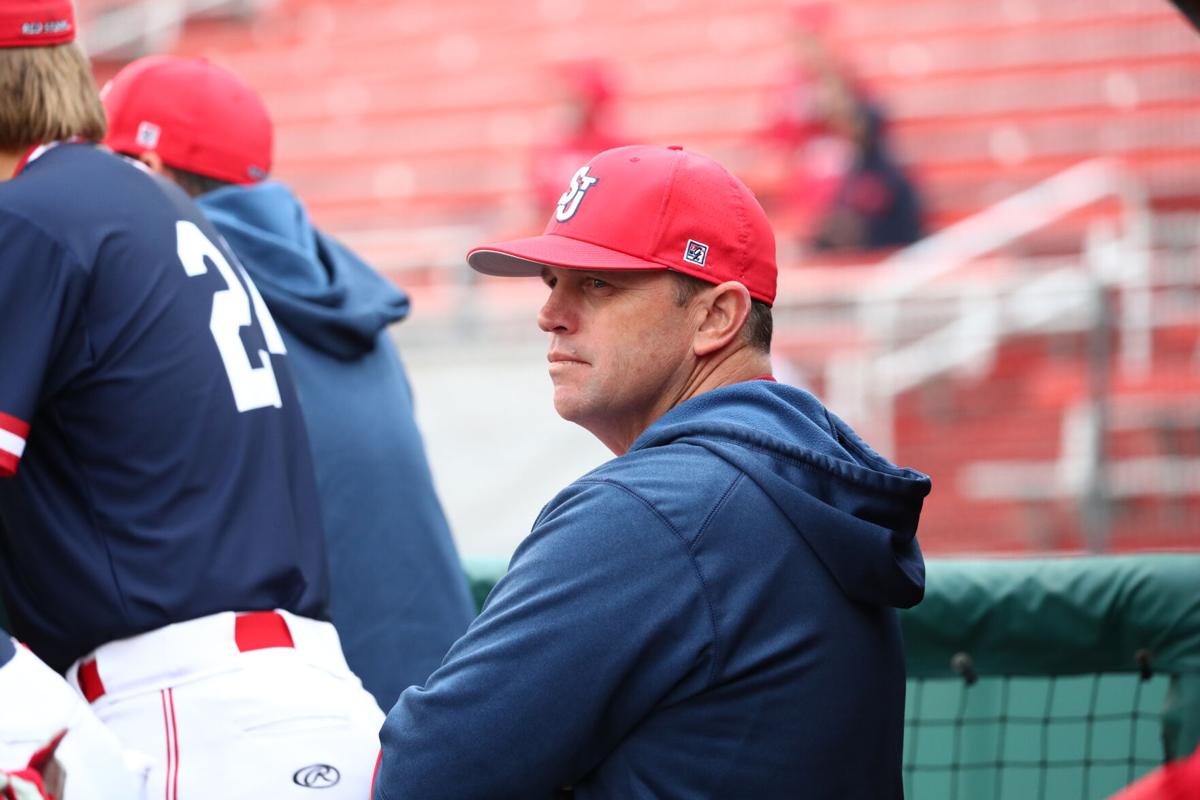 St. John's University baseball coach Mike Hampton says “Baseball is the life these players live” and "an all-year thing," so they were disappointed to see their 2020 season canceled due to the coronavirus. 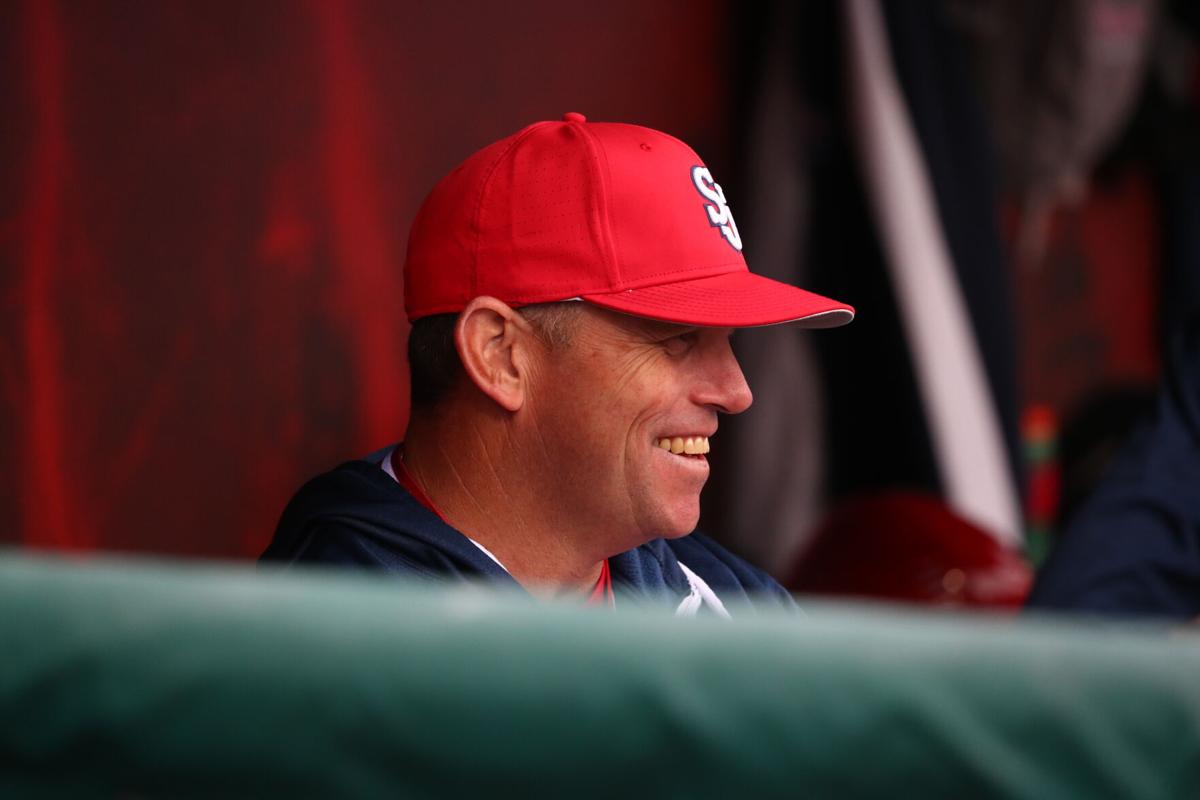 Although disappointed that the 2020 season was canceled due to the coronavirus, St. John's baseball coach Mike Hampton said being the son of a military man "taught me to be in the thought process of making the best of a situation and always staying positive.”

St. John's University baseball coach Mike Hampton says “Baseball is the life these players live” and "an all-year thing," so they were disappointed to see their 2020 season canceled due to the coronavirus.

Although disappointed that the 2020 season was canceled due to the coronavirus, St. John's baseball coach Mike Hampton said being the son of a military man "taught me to be in the thought process of making the best of a situation and always staying positive.”

First in batting average in the Big East. First in doubles and stolen bases. Second in hits and runs scored. Third in home runs. Breakout starts from three freshman All-Americans. A drubbing of 19th-ranked Georgia Tech on the road. Two convincing home wins.

The St. John’s baseball team was ready to show the Big East, and everyone else, its 2020 brand of Red Storm ball.

And then, it hit.

The virus took no prisoners. In addition to those it sickened or killed, the victims included professional baseball, collegiate baseball, high school baseball, Little League baseball and just about every other sport. Not to mention jobs, school, recreation and anything else once considered normal in an already chaotic world.

Before COVID-19 reared its ugly head, however, the Johnnies were beginning to click. While the team endured some tough losses against stiff competition down South and out West during its annual nonconference road trip, it had begun to show promise. Highlights featured an 11-1 defeat of aforementioned Georgia Tech of the Atlantic Coast Conference (ACC) and a series win against the University of California, Berkeley.

St. John’s returned to Queens on March 10 for its home opener against Saint Peter’s. The Red Storm clobbered the Peacocks 21-1 in their 2020 Jack Kaiser Stadium debut. The next day, the Johnnies defeated Iona 9-3 at “The Jack.” Thirty runs in two days.

The source of this offensive onslaught? Two significant contributors were freshman sluggers Jake Lazzaro and David Glancy. Yes, freshmen. Lazzaro, an infielder voted the team’s Most Valuable Player, had been batting .327 — good for fifth in the Big East — and was named the conference’s Player of the Week in late February. Glancy, an outfielder with pop, was tied for third in the Big East in RBIs (along with teammate and junior infielder Justin Folz) and led the Johnnies with three home runs despite half as many at-bats as the team’s regular starters. Glancy drove in eight of the Red Storm’s 21 runs in the home opener — the most RBIs in a game by a St. John’s player in a decade.

Those performances did not go unnoticed. Lazzaro and Glancy were named Freshman All-Americans by Collegiate Baseball Newspaper, accompanied by teammate and right-handed pitcher Sonny Fauci.

Hence why the cancellation of the season was so deflating. The squad was young, dynamic, exciting. It sought to claim the Big East’s regular-season and tournament titles and return to the NCAA Tournament — like it had done in 2018. The team even had a new head coach: Mike Hampton. Though he certainly wasn’t “new” to Red Storm baseball.

Hampton had served as recruiting coordinator and hitting instructor for 18 years under longtime St. John’s head coach Ed Blankmeyer. Blankmeyer had been in command for 24 seasons, a legendary run that included 829 wins, five Big East Tournament titles and 11 NCAA appearances. In January, Blankmeyer left Queens for Brooklyn to manage the Cyclones, the New York Mets Class A Short-Season affiliate, as well as to assume the role of extended spring training coordinator with the Mets. Hampton now had the reins of the program.

But then came March 12. Athletic activities were suspended. The coronavirus was here to stay, at least for the foreseeable future.

Under the school administration’s direction, Hampton met with his team, which had only played 14 of its scheduled 55 regular-season games (the Red Storm’s overall record was 5-9 when play was halted).

“It was an emotional meeting,” Hampton recalls. “At that point, everyone had heard about the virus, but it wasn’t something we had been hugely concerned about. We started hearing about other leagues stopping play, like the Ivy League and Patriot League. It was one league after another.”

At the meeting, Hampton told his players to visit their families and get home safely. The athletes were disappointed but, according to the coach, handled the news calmly. Such professionalism reminded Hampton of one of his old recruits: Joe Panik, a former Johnnie star who made a name for himself in the majors. The second baseman, who won a World Series ring with the San Francisco Giants in 2014, is now a Toronto Blue Jay. Panik also has faced uncertain circumstances, as Major League Baseball’s return was far from guaranteed and still may end suddenly if virus concerns grow. As if that wasn’t enough, the Blue Jays were briefly homeless before Buffalo opened its doors.

Hampton, though, understood his players’ dismay regarding the abrupt end to the season.

“Baseball is the life these players live,” Hampton stresses. “It’s an all-year thing, something they put a lot of time into. A lot of them begin preparing for the next year right away during the summer. So, yeah, it’s disappointing.”

When he first heard the season was over, the coach immediately thought of his seniors and whether they would ever play their beloved sport again.

His concern was addressed on March 30, when the NCAA ruled that all Division I spring athletes would be granted an extra year of eligibility.

“It was the right thing to do, to give the players a year back,” Hampton says. “It makes my job more difficult — I have to look at it as a four-year turnaround instead of a one-year turnaround. But I’m happy. The NCAA has made some tough, but good, decisions.”

Hampton had a prestigious playing career at Clemson University in the early 1990s and was drafted by the Cincinnati Reds (he reached the High-A level in the Reds organization before an injury forced him to retire). He hit .380 as a senior at Clemson — a sublime season he would have never completed had he been a senior in 2020. Putting himself in the shoes of his players, Hampton believes his late-teens/early-20s self would have been able to handle this unprecedented situation stoically.

“I’m used to some adversity,” Hampton says. “My father was in the military for years, and we moved from place to place. It taught me to be in the thought process of making the best of a situation and always staying positive.”

It’s a mindset he’s been relaying to his players throughout the pandemic. Since the cancellation, the team has communicated via video call and text, the safest avenues for human interaction right now.

“Nobody’s been alone,” Hampton emphasizes. “We’ve had numerous Zoom calls and texts as a whole group, by position, and some one-on-one. In June, we had two Zoom calls per week with the team and the incoming guys. This slowed down in July, when some of the guys started playing in collegiate leagues, but we’ll start up again, especially as the academic year approaches.”

The collegiate leagues Hampton refers to are amateur summer leagues in which college ballplayers compete to maintain and develop their skills, as well as gain exposure. Some Red Storm players participated in them this summer, but several have had to stop due to virus concerns, especially in stricken states such as Florida and Pennsylvania.

“I want the players to be comfortable,” says Hampton. “I’m fine with some players playing and some not. Some may have needed the break and the time off to appreciate the game. Some may need to take some time to hit the weight room.”

To ensure the team stays in some type of baseball shape, Hampton sent a letter to his players explaining conditioning expectations. The coaching staff even suggested bodyweight workouts, aware that some players were confined to rooms in their houses or apartments. Hampton notes that some of his pitchers have been throwing to friends who are catchers, sometimes in backyards. He admits hitters have had and will have a more difficult time maintaining their swings, since finding a place to hit and take true batting practice is challenging when most batting cages and fields are off limits. It seems the most creative players will find a way to keep their skills sharp. Viral (no pun intended) videos on YouTube and Twitter demonstrate the extraordinary lengths athletes will go to train…even if they don’t know when their next game will be.

Next season, whenever that is, will be intriguing for both St. John’s and collegiate baseball. Half the Red Storm seniors will return (using the extra year of NCAA eligibility) and half will not.

“It depended on each senior’s situation,” Hampton says. “Some were ready to move on to the real world. Some wanted to continue their baseball dreams. I supported either decision.”

The NCAA has permitted more roster leeway for the coming season. St. John’s, which usually carries about 35 players on its roster, will have a few more next year. Hampton has heard, however, that other programs’ rosters might balloon to up to 60 players. Such a large roster is a logistical nightmare (and would make it more difficult to prevent the spread of COVID-19, absent an effective vaccine). But hey, those teams will have an endless supply of bullpen relief and pinch hitting.

Hampton and his players will hit the diamond with a renewed appreciation for America’s pastime when they return. It’s only natural after what you love is taken away. The coach recognizes that it’s been a trying experience. But he’s also thankful for the leadership and support that athletic director Mike Cragg and the university have provided.

“We have a plan and are going into battle,” Hampton fearlessly asserts.

Part of that plan is ensuring that players stay on top of their academic work — they are college students after all. It shouldn’t be a difficult task, as the team was recently given the 2019-20 Big East Team Academic Excellence Award for the highest cumulative grade point average among baseball teams in the conference.

And, of course, the fans are not forgotten.

“Hopefully the return of Major League Baseball will spark a rejuvenation for the game,” the coach says. “I hope the fans return to Kaiser Stadium just like they will to the pro ballparks.”

Hampton understands that his players and society have been through a lot the past few months. He believes awareness and adaptability are key to thriving when circumstances are far from ideal.

“Challenges come your way throughout life and you must recognize them,” declares Hampton. “My players are good, smart kids. They made the necessary adjustments to a situation they had no experience with.”

It’s a lesson for us all.