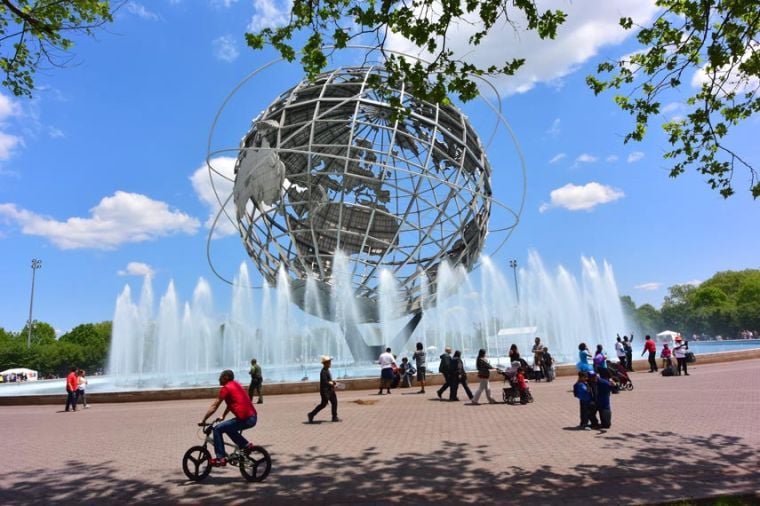 The fountains around the Unisphere ran for a while during the joint celebration of the 50th anniversary of the World's Fair for which it was built, as well as the 75th anniversary of the preceding one. The water was later turned off, some said because the wind was blowing it onto attendees. 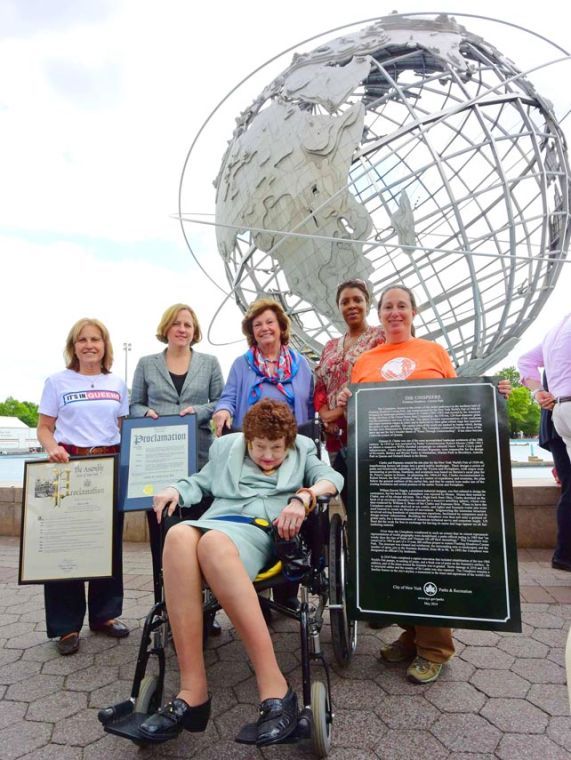 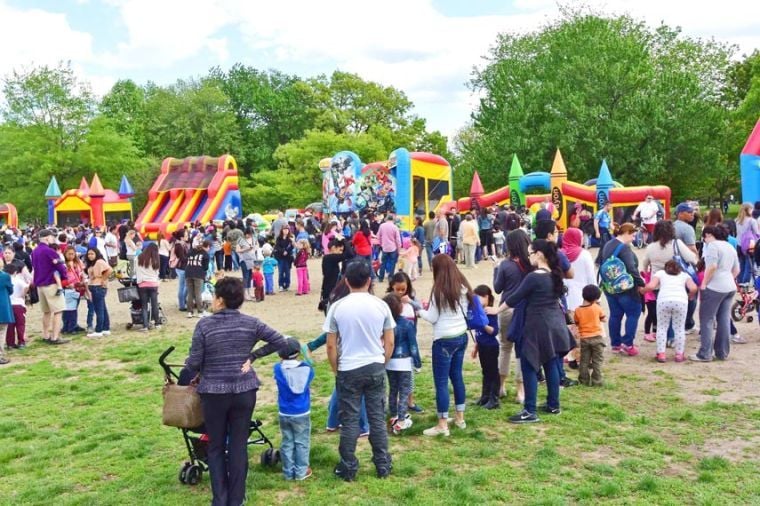 Bounce houses for the kids are a staple of fairs all over, and the World's Fair anniversary celebration was no exception; it had several.

The fountains around the Unisphere ran for a while during the joint celebration of the 50th anniversary of the World's Fair for which it was built, as well as the 75th anniversary of the preceding one. The water was later turned off, some said because the wind was blowing it onto attendees.

Bounce houses for the kids are a staple of fairs all over, and the World's Fair anniversary celebration was no exception; it had several.

In the middle of the dual 1939-40 and 1964-65 World's Fair Anniversary Festival in Flushing Meadows Corona Park on Sunday, longtime Flushing resident Alan Sherman experienced what he called "the most amazing moment of my life."

It came as he sat in a Greyhound Escorter, a vehicle resembling an oversized golf cart that was built specially to transport visitors around the 1964 fair.

"Sitting in it is more than a dream come true," he said.

Standing on the same grounds that have meant so much to him since he visited the fair as a 4-year-old child was "like reliving my past," Sherman said.

The fair, he said, came to represent "a turning point in U.S. history," and the anniversary celebration "brings back memories of a simpler, happier time."

Spending the day with him was his son, Jonathan, 11, who has seen lots of photos and videos of the 1964-65 fair, courtesy of his father. "I think it's cool. I wish I could have been there," Jonathan said.

Many families, in fact, used the festival as an opportunity to bring generations together.

Jay Woliner, 65, of Fresh Meadows, who was accompanied by his son, Justin, recalled going to the fair for the first time at the age of 16 with his school, traveling from the Bronx.

"It was such a thrilling experience," Woliner said.

Justin, 30, looked around the park and said, "I'm trying to get an understanding of what they actually featured here" during the fair. "I feel bad we can't have something like that in my time."

It was the memory of the fair's famous Belgian waffles that brought Queens native Susan Amato back to the park.

"They were something new and exciting," she said. "We want to relive the memory."

So, too, apparently, did lots of people. After waiting on line nearly half an hour, Amato was still about a block away from the front.

With Amato was Astoria resident Richard Simon, who said he visited the fair no fewer than 175 times, sometimes more than once in a single day.

Being back at the fairgrounds "brings back a lot of memories," he said.

"You realize you came with people who are no longer here," Amato added.

For Adrian Luna, 21, of Flushing, Sunday was an opportunity to finally experience the atmosphere firsthand. "I've always loved looking at historic pictures. I loved looking at photos from the World's Fair," he said.

As it had been during the fair, the Unisphere, the 300-ton globe in the center of the park, remains an iconic figure, representing the fair's theme, "Peace Through Understanding." It was designed by civil engineer and landscape architect Gilmore D. Clarke.

Clarke's widow, Dolores, was an honored guest on Sunday. Obviously moved by the recognition accorded her husband, including proclamations from the Queens borough president and state Assembly, she said, "I'm so thrilled. He deserves every honor. He was gifted. He was a totally dedicated human being."

Borough President Melinda Katz told Clarke, "We are thrilled to have you here in the Borough of Queens. Look at the excitement that has formed in the park. Every time you see the borough of Queens, you see the Unisphere and the State Pavilion, both of which need to be here for generations to come. Were it not for your husband and his great foresight, we would not have the beauty we have here."

Allan Smith, 75, of Woodhaven, a member of the board of the Queens Historical Society, said the Unisphere has always stood out "for the scale and the artistry behind the design. It's a mark on the land and a landmark."

Richard Hourahan, curator for the Society, manned a booth at Sunday's celebration that featured relics from the fairs, which served as "rites of passage" for some.

Pointing to the drinking glasses representing various pavilions, license plates, serving trays and banners, he said, "These are things that people take away. It's poignant."

Perhaps no one in attendance had more far-reaching memories than Arline Giller, who, along with her husband of 66 years, was given the royal treatment on Sunday, as she had been at the first of the borough's World's Fairs.

While being interviewed by TV reporters, she pulled out an antique press pass she had gotten from her journalist father. "We didn't spend one penny" at the fair, she said. "We were welcomed like celebrities."

Among the attractions on Sunday was a display of antique cars, including the Batmobile that was built for a Batman film in the mid-1960s; performances by Liverpool Shuffle, a Beatles tribute band, and the Queens Symphony Orchestra; and a fireworks display that concluded the celebration.

great article Mr. Lord.. i really enjoyed reading this. it was a great day in the park and sphere looked beautiful surrounded by the water...[smile]

Hope they restore the New York pavilion, its a shame to see it rusting away year after year remember riding up the elevator and looking out over the world's fair and seeing the NY skyline It would be great to go up there again. The pavilion also had a tiled map of the United States.Also remember riding in the amphibious cars on the lake!