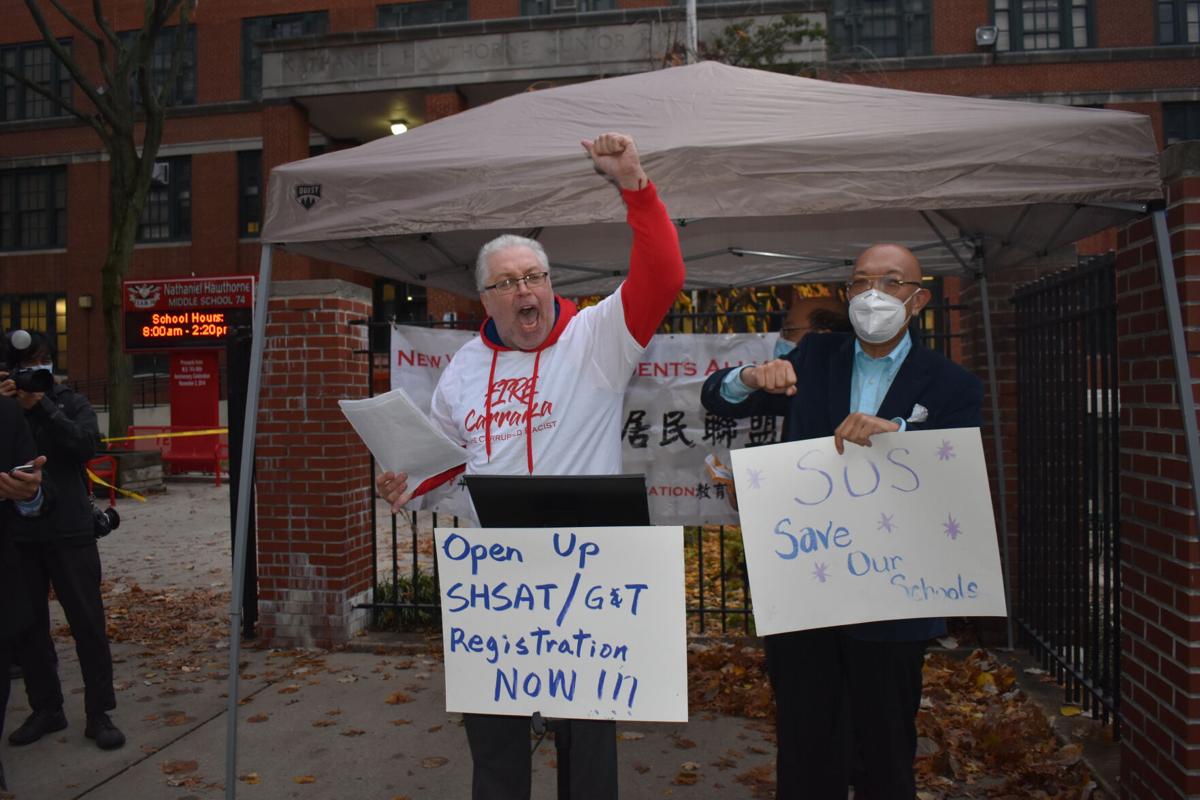 David Rem, left, speaks at a Nov. 12 rally in favor of the Specialized High School Admissions Test and gifted and talented programs in New York City Schools, joined by a representative of the Chinese American Citizens Alliance of Greater New York representative. 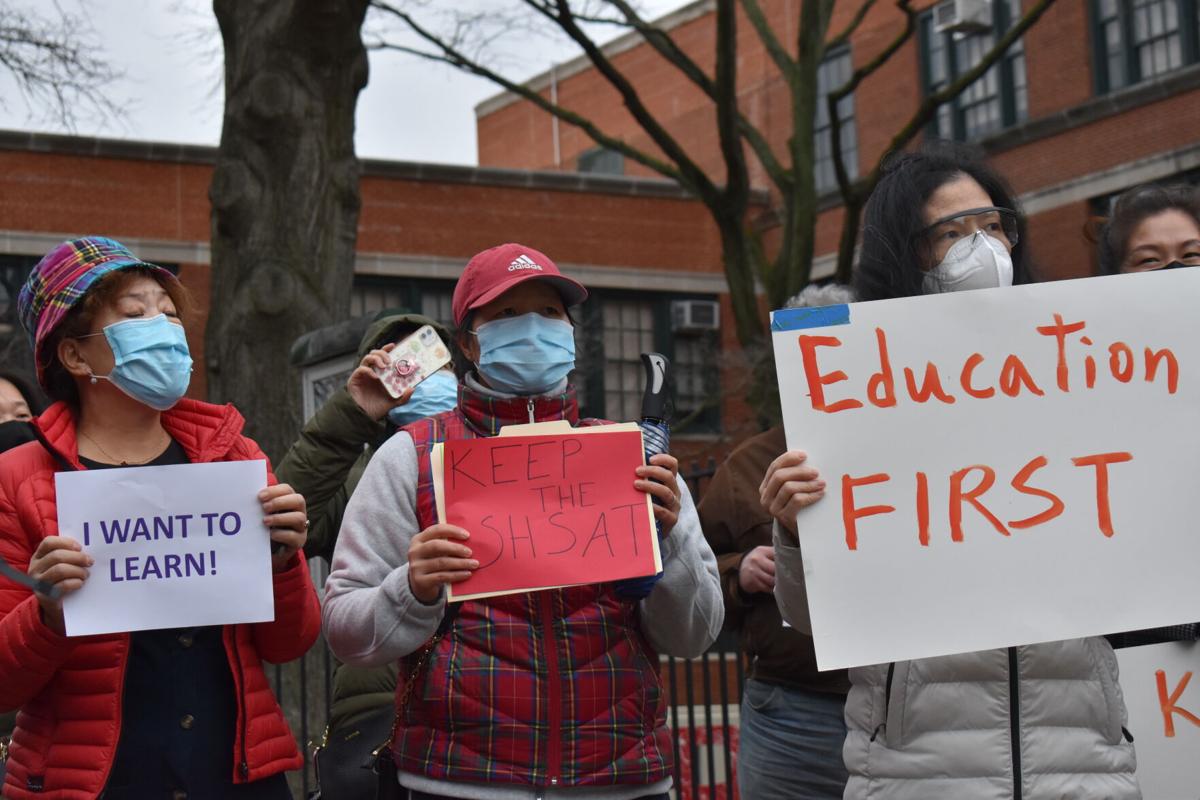 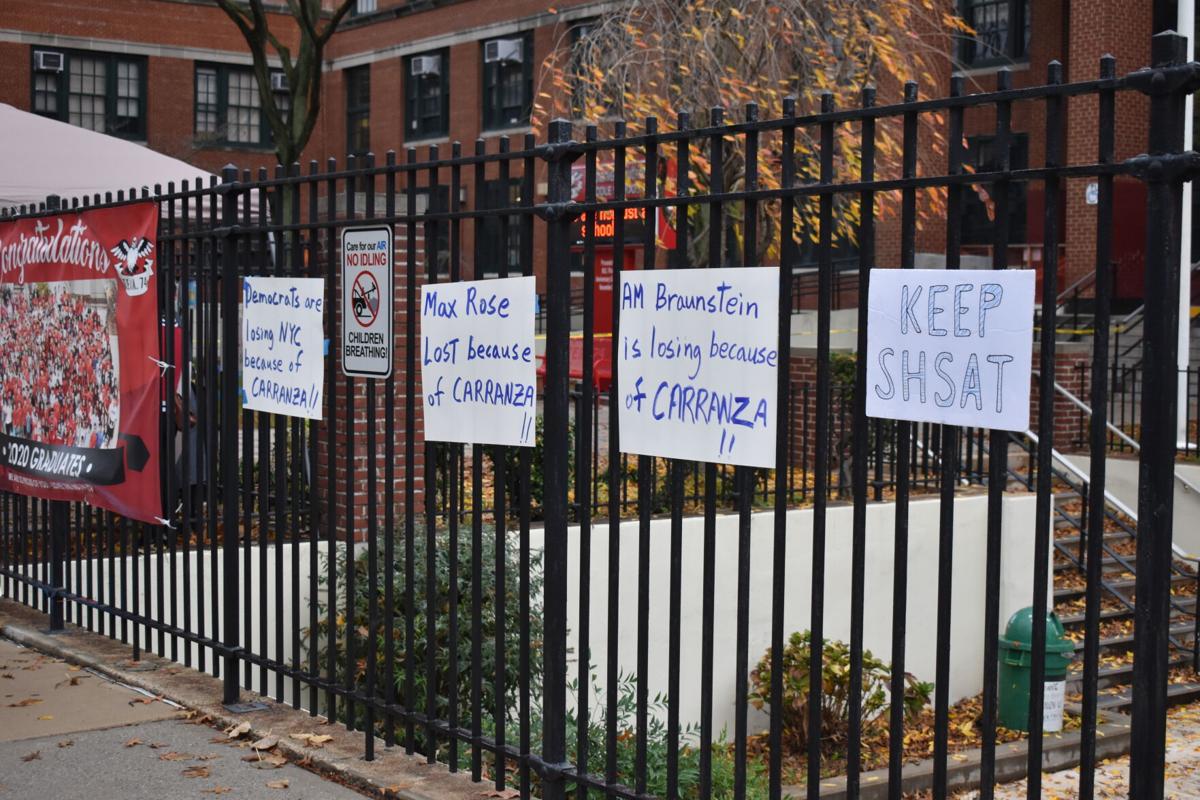 David Rem, left, speaks at a Nov. 12 rally in favor of the Specialized High School Admissions Test and gifted and talented programs in New York City Schools, joined by a representative of the Chinese American Citizens Alliance of Greater New York representative.

The dozens of parents gathered in front of MS 74 Thursday afternoon couldn’t be bothered by the rain and dropping temperatures — they were too angry that the Department of Education has, yet again, delayed specialized high school as well as gifted and talented testing dates.

The DOE had released fliers two days earlier with information on how to register for Division of Early Childhood and Enrollment information sessions, but after following the link, parents found they all have been “postponed until further notice.” Similarly, the Specialized High School Admissions Test has been postponed indefinitely after the department said it has to adapt to new COVID-19 developments.

“There must be a way to administer the test,” said Laura, a parent of two public school children, who she said have spent the past few months of the pandemic preparing for the SHSAT. “Please do not take away the dreams and hopes of our children by erasing all the progress that they make throughout the year and by taking the opportunity away from them. Do not erase my child’s progress, do not eliminate screened schools, do not take away our children’s hopes.”

District 26 parents were even further outraged at the DOE’s negligence at including their students — of the 10 virtual scheduled SHSAT information sessions, two were dedicated to Queens students, and those included all school districts except for northeast Queens’ District 26. One parent in the crowd said she believed that was done on purpose in an attempt to exclude working-class families, a large portion of which are of Asian-American descent.

One of the controversies surrounding the specialized high schools that use the SHSAT is that they enroll overwhelmingly Asian populations. An April 2019 Manhattan Institute study found that within the eight schools, roughly 62 percent of students are Asian. Black and Latino students are vastly underrepresented compared to their share of the overall school population.

Some officials have pushed for the SHSAT to be eliminated in the name of equality, including Schools Chancellor Richard Carranza and Mayor de Blasio. The parents gathered at MS 74 seemed to think the continued postponement is just another attempt to dismantle admissions testing for the eight specialized schools, which is protected by New York State law.

“Why is there no way for 30,000 students to take the test if they are able to get more than half a million students to school on a daily basis? The test only takes a few hours,” said one mother, who didn’t reveal her name. “We demand an answer. Open the test and don’t play the politician game with us.”

David Rem, wearing a “Fire Carranza” T-shirt that called the chancellor a “corrupted racist,” spoke about de Blasio’s hypocrisy around specialized testing — the mayor sent his son, Dante, to Brooklyn Technical High School before he moved on to Yale University.

“A filed lawsuit is the only thing that will prod de Blasio to finally administer the SHSAT test,” Rem said. “Unfortunately, there exists no legal ramifications or recourse [with] respect to the critically needed, in this city, gifted and talented programs.”

SHSAT registration has been delayed well beyond the original Oct. 21 closing date, but is still not open, and the dates for the test have been postponed indefinitely. The high school application due date has also been extended beyond Dec. 4. Testing for Gifted and Talented programs is also suspended.

The standards of some of the finest high schools in our city cannot be yet another victim of this pandemic. We have no shortage of proctors and large public spaces with good ventilation that would allow social distancing while taking the test. Save our specialized schools!