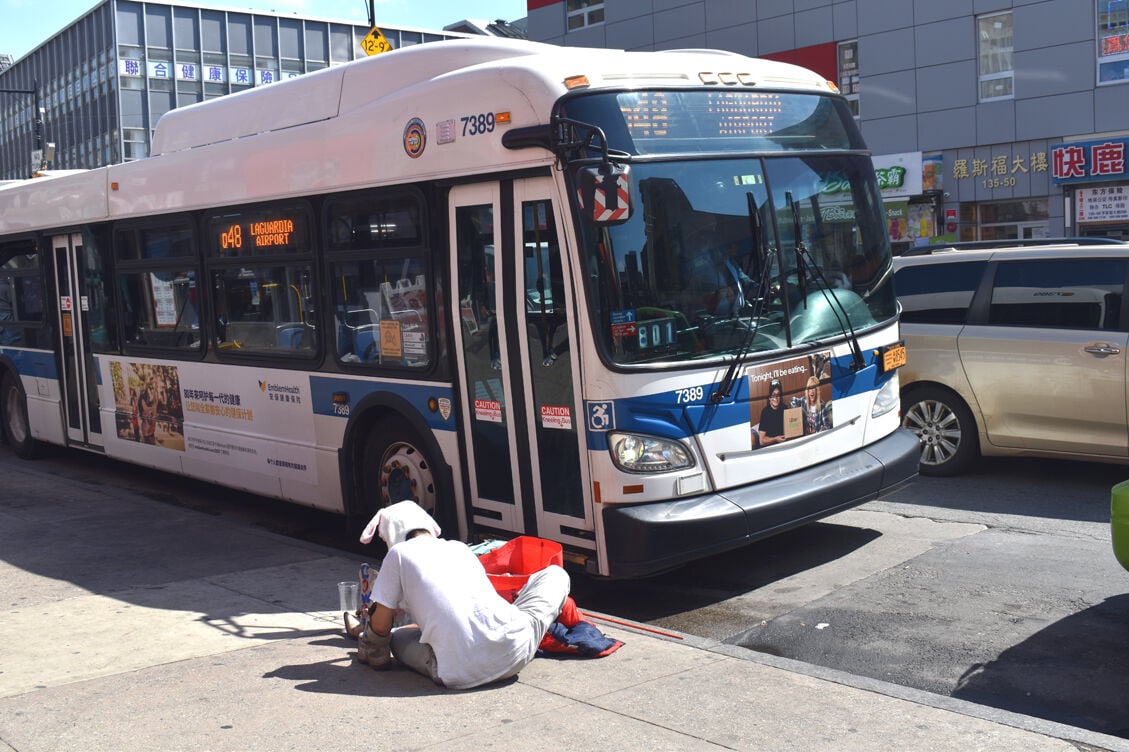 The number of homeless individuals living in Downtown Flushing has visibly increased during the pandemic. The majority congregate in front of transit hubs and train stations to panhandle commuters, but area business owners note the aggression toward customers has also been on the rise. 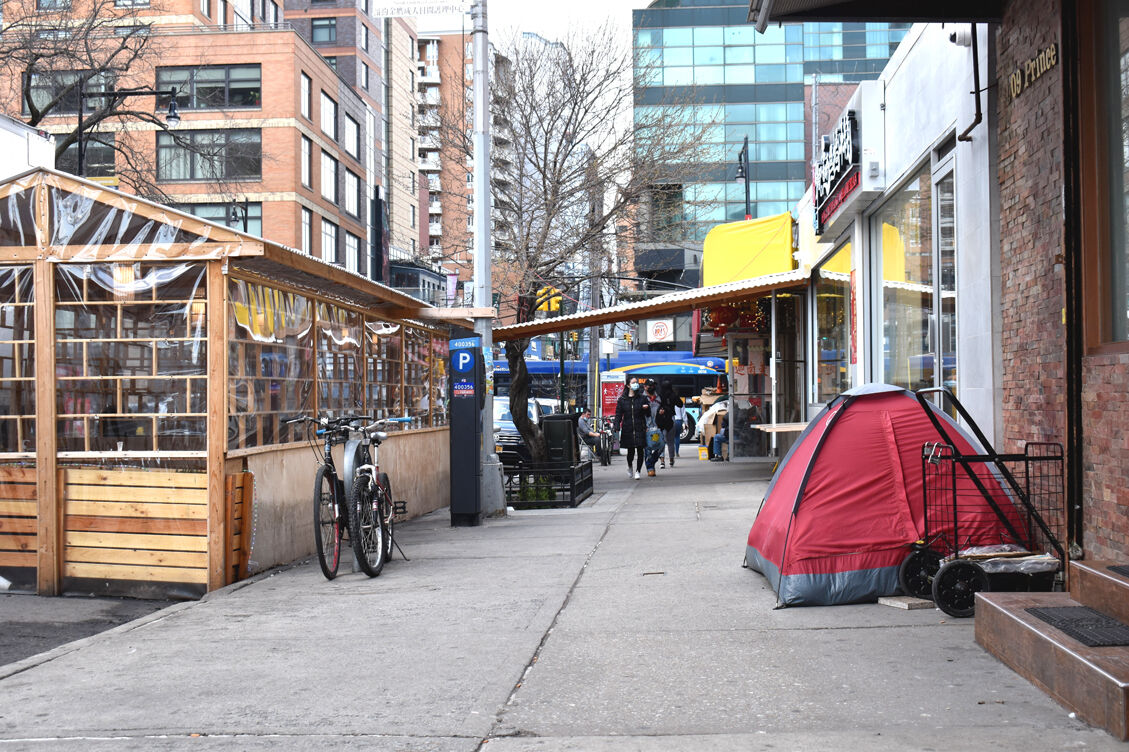 Tents have popped up around Prince Street during the pandemic and are sometimes removed by the Sanitation Department, but always return, according to the Flushing BID. 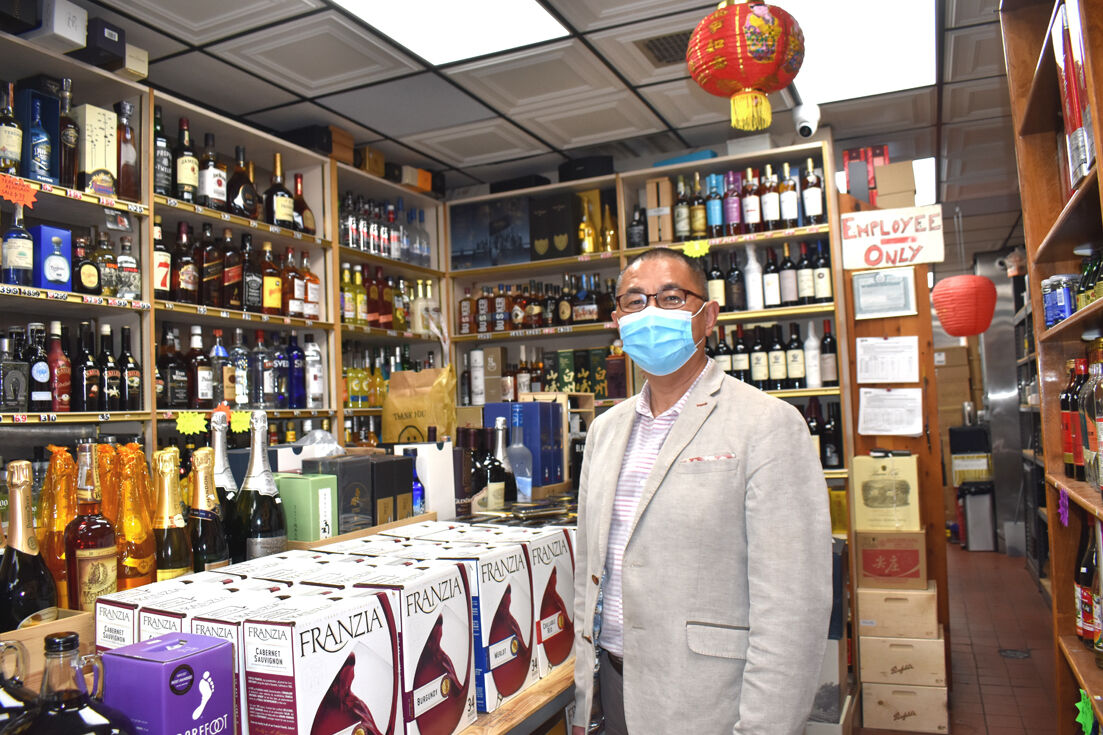 Timothy Hwang, who owns a liquor store around the corner, says the city needs to do more for the homeless before the problem ruins the neighborhood’s character.

The number of homeless individuals living in Downtown Flushing has visibly increased during the pandemic. The majority congregate in front of transit hubs and train stations to panhandle commuters, but area business owners note the aggression toward customers has also been on the rise.

Tents have popped up around Prince Street during the pandemic and are sometimes removed by the Sanitation Department, but always return, according to the Flushing BID.

Timothy Hwang, who owns a liquor store around the corner, says the city needs to do more for the homeless before the problem ruins the neighborhood’s character.

Panhandling has plagued Flushing for years. Homeless individuals set up camp and ask passersby for loose change along the Main Street commercial corridor, especially in front of the Long Island Rail Road and 7-train stations. Handmade cardboard signs line the roads between street vendors, often positioned beside an empty Big Gulp cup and a sleeping body.

The Downtown Flushing homeless population has been steadily rising over the last year — tents have popped up on Prince Street directly across the road from the La Jornada food pantry, which draws hundreds of people each day in a line that often stretches for several blocks — but the small business owners who share the district with the beggars have noticed an increase in their hostility as well.

“Some of them get drunk and they just walk into the restaurant and they take the customer’s seat and sit there and start yelling and screaming,” said a 40th Road restaurant owner who asked to be identified as Vincent. The employees ask the intruders to leave, but they typically refuse and stay seated for up to half an hour. Their abrasive behavior and lack of face coverings drives customers away, the owner said.

Beggars had asked his customers for money in the past, but Vincent said the homeless population recently seems more interested in harassing them and damaging his property. Just the night before, he said, he caught one man using his outdoor seating venue as a toilet.

The incidents happen multiple times a week, and have been becoming more aggressive. Sometime in March, which Vincent said was the worst month yet, a man with liquor in hand walked to the second-floor office and hounded the women inside. The door now stays locked.

Vincent has only called the police twice. In both instances, the homeless persons had left the building before officers arrived, but he did not feel comfortable detaining the intruders himself. Threatening to call the police doesn’t affect their behavior either — Vincent said the homeless don’t seem intimidated by the idea of arrest.

“Before the pandemic, the safety environment was better. Every year was improving, but [during the] pandemic, it’s getting worse,” he said.

There is no perfectly reliable data on how many New Yorkers sleep on the streets each night because the number varies from day to day, but it was estimated at 3,500 to 4,000 before the pandemic. The number of individuals sleeping in shelters each night has been decreasing, but is not indicative of the homeless living outdoors or in the subways.

An individual experiencing homelessness must consent to transitioning into a shelter, a spokesperson for the Department of Homeless Services stated. Unless individuals are caught conducting illegal activities or are voluntarily leaving their camp on Main Street, they cannot be removed no matter how many times law enforcement is called on them.

Because the police can do little about the situation, Flushing business owners have not even bothered reporting the trouble to the 109th Precinct, located just a few blocks away.

“We’ve seen an increase in homelessness, but as far as aggravated panhandling, I’m not seeing spikes in the 109,” said Captain John O’Connell, the commanding officer.

The commander said he’s aware of the ongoing problem, and encourages business owners to report escalating instances, especially now that the police presence in Flushing has increased. The addition of new patrols was ordered to deter anti-Asian hate crimes following the Atlanta shootings.

Like the business owners, O’Connell suspects the aggravated panhandling is another symptom of the pandemic: About 578,000 New York City residents lost their jobs during 2020, according to state Labor Department data.

“The pandemic has changed everybody’s life,” he said. “The homeless population has less things available to them. There’s just devastation on their part.”

In the face of growing desperation, the homeless have flocked to Flushing in hopes of raising money, said Timothy Chuang, co-chairperson of the Downtown Flushing Transit Hub Business Improvement District.

“This is a very good place because a lot of kind people give them the money. Asian people are very kind,” he said, pointing out that the Main Street strip between Roosevelt and Sanford below the train tracks is the worst.

Chuang owns two businesses on the strip: a bubble tea shop and a grocery store. The homeless sit on the street and beg passersby for cash, and though they often remain passive, he worries they are adding another undue burden onto Downtown Flushing businesses that are already dealing with so much: financial shortfalls, anti-Asian sentiment and a new and unpopular busway.

Thomas Hwang, the owner of Taipei Fine Wine & Liquor on 40th Road, echoed Chuang’s concern and pointed out his belief the growing homeless population is affecting neighborhood character. He suggested the city find a way to provide the indigent with shelter, whether voluntary or not, in a way that treats individuals with kindness and respect, a mission he has asked his own employees to replicate.

Homeless individuals come into the store several times a week asking for money from customers or free liquor from the employees. Hwang has directed his workers not to give away any merchandise, but also not to call the police unless the behavior becomes too aggressive. Usually, the beggars leave on their own.

“One time a customer was buying liquor and he left $100 right by the register. I saw one guy come in and snatch the $100 and run away,” Hwang recounted. “I was chasing after him, trying to find out where he went. Obviously, I didn’t get anywhere. I also reported it to the Police Department, but they said there’s not much they can do. It’s a very difficult situation.”

Smaller scale theft is not worth the chase for other businesses. Michael, an employee at a Roosevelt Avenue bakery, said he has to hide his tip jar because it’s been stolen before. A man came in and asked for money, but Michael refused, so the man helped himself: He reached through the Plexiglas divider where a hole had been left for customers to slip tips through, grabbed the jar and ran out the door. Reporting the theft or chasing after the thief was not worth the $3 that was inside, Michael said.

Foot traffic and sales are more valuable than the tip jar, he added, but he worries the homeless man’s antics may have stolen them, too.

“Customers will turn around and leave,” Michael said. “The customers don’t want to deal with it.”