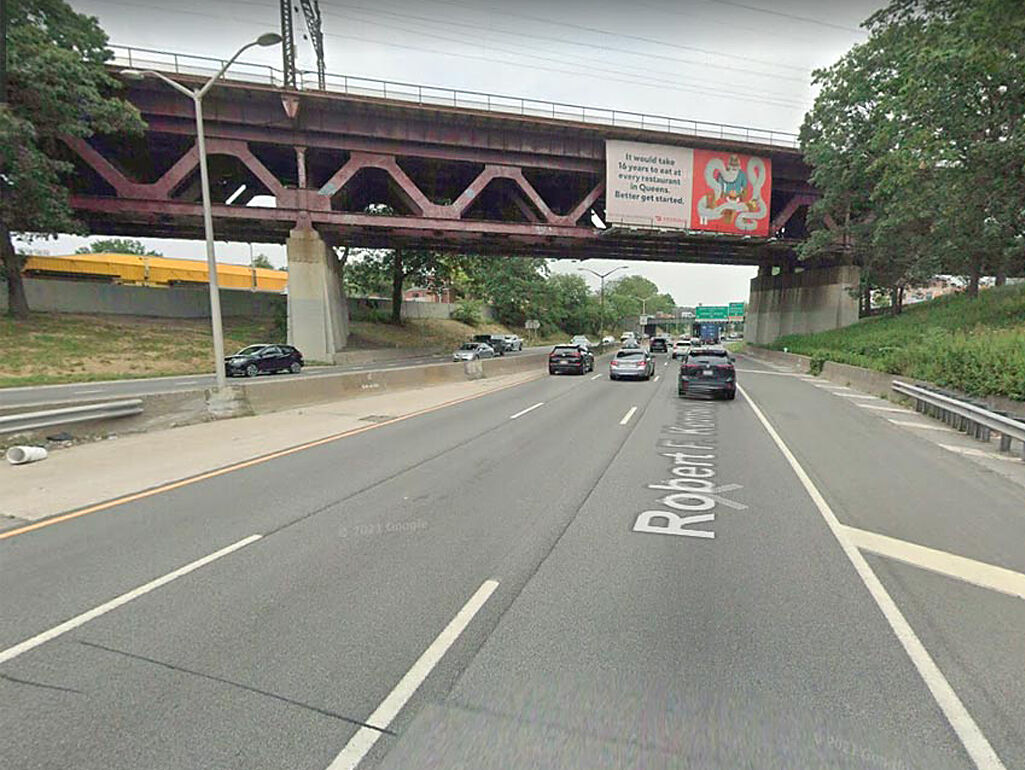 Want to take an N train east along the Grand Central Parkway to LaGuardia Airport? The tracks would have to go over or under the trestled approach to the Hellgate Bridge.

Want to take an N train east along the Grand Central Parkway to LaGuardia Airport? The tracks would have to go over or under the trestled approach to the Hellgate Bridge.

True to its word, the Port Authority of New York and New Jersey will conduct a thorough review of mass transit options to LaGuardia Airport in the wake of a proposed AirTrain route being shelved at least temporarily by Gov. Hochul.

In a statement issued last week, the PA announced that three recognized transportation experts will lead the review. The group includes Janette Sadik-Khan, who served as New York City’s transportation commissioner from 2007 to 2013 under former Mayor Mike Bloomberg.

Also tapped are Philip Washington, the CEO of Denver International Airport and the former head of the Los Angeles Metro transit system; and Mike Brown, former commissioner of Transport in London and former managing director of Heathrow Airport in London.

Gov. Hochul on Oct. 4 called on the PA to study alternatives to the $2.1 billion AirTrain proposal that former Gov. Andrew Cuomo long had supported to speed up travel time between LaGuardia and Manhattan.

Her announcement came less than an hour before a scheduled press conference with AirTrain opponents on the Malcolm X. Promenade, a park on the shore of Flushing Bay.

The plan that was moving forward was an elevated rail loop that run between the airport and a terminal to be built adjacent to the Mets-Willets Point station on the No. 7 elevated subway line. It also would be located conveniently close to a Long Island Rail Road station just north of the Billie Jean King National Tennis Center in Flushing Meadows Corona Park.

Area residents and environmental organizations protested that it both would have negative impacts on residential neighborhoods in East Elmhurst and would harm the Promenade.

The Federal Aviation Administration back in July approved the PA’s environmental review plan for the project, though critics said it should not have focused solely on the AirTrain option.

That, according to a statement on the PA’s website, is no longer the case.

The options that will be analyzed as part of the review process will include, at minimum, improved and expanded bus service, including potential for dedicated lanes; ferry service; subway extension options; and elevated guideway options including light rail from various LIRR and subway stops — or an AirTrain;

Additional options, the agency said, may be added to the review based on outside input.

Topics under consideration will include but not be limited to construction and other impacts on the local community; customer experience and length of travel time; greenhouse gas reduction; improved access to the airport; project cost; projected timeline to become operational; removal of cars from roadways; and ridership.

The final report will completed as expeditiously as possible, the PA said, and will be made public upon completion.

A solution gaining in popularity with politicians who opposed the AirTrain, including Deputy State Senate Majority Leader Mike Gianaris (D-Astoria) and Sen. Jessica Ramos (D-Jackson Heights), is an extension of the elevated N train subway line that runs north and south through Astoria between Ditmars Boulevard/31st Street and Queensboro Plaza.

Former Mayor Rudy Giuliani during his administration proposed a northern extension from Ditmars-31st that would have extended tracks over neighborhood streets and required taking private property. That proved as popular with residents and politicians at the AirTrain.

Gianaris has recently backed a route that would have a line break off from the northbound N/W tracks at Astoria Boulevard and curve east down the median of the Grand Central Parkway.

An elevated structure, however, would run into two obstacles — as it headed toward the airport it would have to run below or above the railroad approach to the Hellgate Bridge, which connects major rail arteries in New York and New England. Getting past that, an elevated structure soon would have to go lower to avoid the airspace at the southern end of LaGuardia’s Runway 4-22. At some point the train or passengers would have to get across or underneath the westbound lanes of the GCP to enter or leave the airport proper.

Back in July, Thomas Wright, president and CEO of the Regional Plan Association, told Crain’s New York Business that underground expansion of subway lines in that portion of Queens was impractical because of both the GCP and the below-ground sewage system. The sewers come into play as lines throughout the area run to the Bowery Bay Sewage Treatment Plant, which sits just up Bowery Bay from LaGuardia’s Marine Air Terminal.

Wright also mentioned the problems posed by the Hellgate and LaGuardia airspace.

Larry Penner, a transportation historian and advocate who worked for 31 years with the federal government on transportation grant approvals, said anything involving tunneling would cost far more than the AirTrain’s $2.1 billion price.