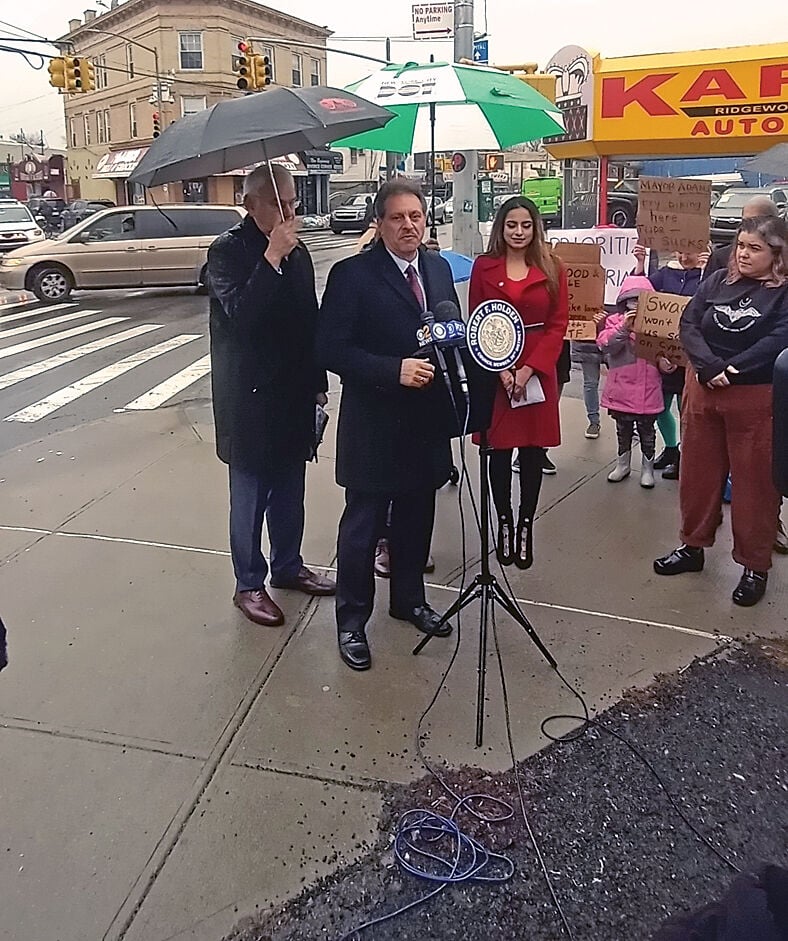 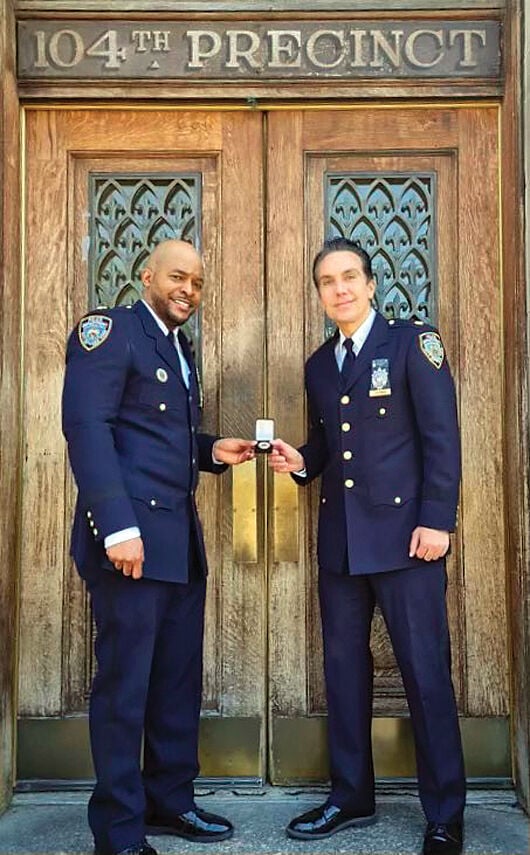 Deputy Inspectors Louron Hall, left, and Kevin Coleman, at the changing of the guard at the 104th Precinct. 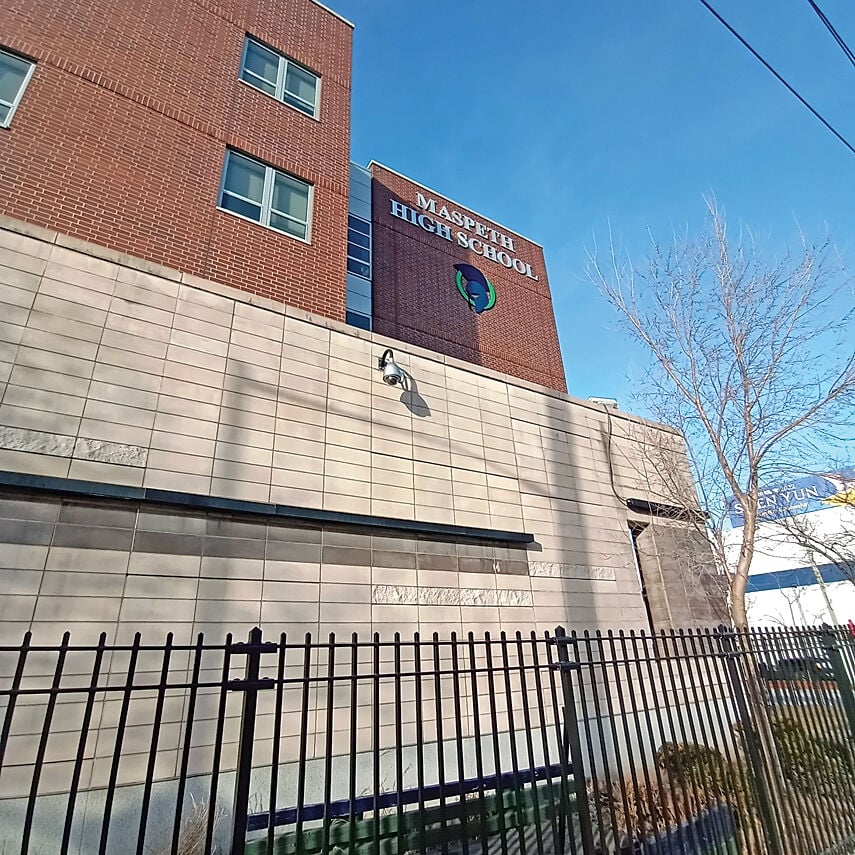 Deputy Inspectors Louron Hall, left, and Kevin Coleman, at the changing of the guard at the 104th Precinct.

The year 2022 brought with it a new mayor facing new and old challenges, but also bringing more opportunities. And the mets, in more ways that one, were once again amazin’.

Hours into the start of his mayoralty on Jan. 1, Mayor Adams, a retired NYPD captain, and NYPD brass including Commissioner Keechant Sewell were in Queens at the morning roll call in the 103rd Precinct station house in Jamaica. The Democrat who won on a law-and-order platform had been beaten there when arrested as a teenager. He called the visit perhaps the most significant step in his historic journey to the mayoralty.

Adams then walked a block south to Jamaica Avenue for a meet-and-greet stroll with his new constituents.

A woman found stabbed to death on an Astoria street was the first homicide of 2022. The victim was found at about 8:35 p.m. near the corner of 23rd Street and Broadway.

Queens Councilwoman Adrienne Adams (D-Jamaica) was sworn in as the new Council speaker.

City Councilman Bob Holden (D-Maspeth) accused the administration of outgoing Mayor Bill de Blasio of discriminating against his 30th District through its policy of setting up Covid-19 testing sites and testing kit giveaways based on the racial composition of council districts.

Gov Hochul directed the Metropolitan Transportation Authority to begin the environmental review process for what has been termed the Interborough Express, a proposed passenger rail line that would run between Bay Ridge, Brooklyn, and Roosevelt Avenue in Jackson Heights. The 14-mile route would connet wit the Long Island Rail Road and 17 subway lines and also serve Ridgewood, Middle Village, Maspeth and Elmhurst.

“We will not surrender our city to the violent few,” Adams said. “We are not going to go back to the bad old days. We are going to get trigger pullers off the streets and guns out of their hands.”

Anthony Hobson, 51, was convicted of second-degree murder and tampering with physical evidence in the 2019 stabbing death of Jennifer Irigoyen, 35, in her Ridgewood apartment. The mother of a young son also was pregnant at the time. The baby did not survive. Hobson would be sentenced to 26 and 1/3 years in prison in February.

Anne Holden, a longtime community volunteer and mother of Councilman Holden, passed away on Feb. 12 following a brief illness. She was 97.

The NYPD’s men’s volleyball team defeated the FDNY on Feb. 13 at Maspeth High School in a fundraiser for families of Police Officers Wilbert Mora and Jason Rivera, who were killed in the line of duty in Manhattan in January. New York’s Finest won by scores of 25-22, 20-25, 25-17 and 25-18.

On Feb. 22, City Department of Transportation Commissioner Ydanis Rodriguez was at the intersection of Cooper and Cypress Avenues in Glendale where a 57-year-old man had been struck by an SUV and then run over and dragged by another on Feb. 12, which was caught on a sickening video. Rodriguez promised quick upgrades. True to his word, the first of a series of changes — reprogramming some traffic signals — came within hours of his visit.

The Greater Ridgewood Restoration Corp. added another feather to its cap with the National and State Registers of Historic Places adding about 445 buildings along the Myrtle Avenue and Fresh Pond Road corridors to their rosters. The designation brings the GRRC’s total number of recognized structures to 2,982.

March 4 marked the suspension of pandemic restrictions in venues, where proof of vaccination was no longer required, and public schools, where masks for K-12 became optional. Masks continued to be required for children, under 5 years old, whom Mayor Adams said remained ineligible for vaccination.

Leaders of the Juniper Park Civic Association, upon learning that the city’s Department of Transportation and Citi Bike made a presentation to Community Board 5’s Transportation Committee about expanding the program in to the district, prepared a counter proposal that they said could bring all the benefits of Citi Bikes with minimal impact on what already is very limited street parking.

The JPCA proposal relocated some bike docks from streets to sidewalks and moved some to different locations near the DOT-recommended sites.

Holden announced that the NYPD agreed to provide a dedicated tow truck to the district Mondays through Fridays to address a serious and growing problem with illegally parked cars. Holden said the commitment came straight from NYPD Chief Kim Royster of the Transportation Bureau.

State Assemblyman Brian Barnwell (D-Woodside) on April 12 announced on social media that he will not seek a fourth term in Albany.

Barnwell stormed onto the scene in 2016, primarying and defeating long-time Democratic incumbent Marge Markey. He defeated Republican Tony Nunziato in 2016 and Eric Butkiewicz in 2018 before running unopposed in 2020.

After starting the season on the road, the New York Mets celebrated their opening day by unveiling their long-planned statue of all-time great pitcher Tom Seaver. The ceremony was attended by Seaver’s widow, Nancy, and his daughters, Anne and Sarah. Tom Terrific’s grandsons threw out the ceremonial first pitches to Mets legends Mike Piazza and Mookie Wilson. Under new Manager Buck Showalter, the Amazin’s then went out and did Seaver, also known as “The Franchise,” proud, clubbing the Arizona Diamondbacks 10-3 on the 75th anniversary of the day Seaver’s fellow Hall of Famer Jackie Robinson broke baseball’s color barrier in 1947.

Officials ruled that Khurshid Abdul-Mutakabbir, who was replaced as principal of Maspeth High School in 2021 in the wake of a massive cheating scandal, would keep his six-figure salary and benefits until retirement, working in an unspecified position. The Department of Education asserts that he will not be working with students.

“We should not be rewarding city workers who are found to have been corrupt with a golden parachute. Taxpayers deserve better,” Holden said. Abdul-Mutakabbir was relieved of his duties as principal in July 2021. Investigations have found that his administration had a “no failure” policy that included teachers helping students with answers on Regents exams, artificial grade inflation and awarding students credit for classes not attended or in some cases not even held. Troubled students were offered early graduation to move them on, and the school boasted a 98 percent graduation rate.

Parents and teachers dubbed it “the Maspeth Minimum.”

The new state budget included $41 million for flooding relief related to the remnants of Hurricane Ida, which struck on Sept. 1, 2021 and killed 11 Queens residents.

Len Santoro of Middle Village stepped down in his fourth term as president of the 104th Precinct Community Council. The former member of the Juniper Park Civic Association left effective April 26 due to his impending move to Arizona.

With summer around the corner, Holden introduced a bill aimed at the increasingly popular pop-up parties that began to proliferate and raise havoc with neighbors in his district and others. The parties led to numerous complaints from residents — as well as a pair of shootings in 2021. His bill targeted organizers of parties, or in some cases the building owners, when vacant storefronts host gatherings without following city regulations or commonsense precautions.

The Chronicle received eight awards, including three first-place nods, at the annual spring convention of the New York Press Association, led by Associate Editor Deirdre Bardolf who was named Rookie Reporter of the year. The Chronicle also took first place for coverage of religion for the second straight year, and coverage of education.

Migdalia Ortega, 51, was shot and killed in her Ridgewood apartment on May 9 in what police believed was a domestic incident. A neighbor who came to check on her also was wounded. Pedro Cintron, 55, who police said was “being sought” for her killing, was found dead the next day on McKibben Street in Brooklyn of a self-inflicted gunshot wound.

Deacon Kevin McCormack was appointed the new superintendent of schools for the Diocese of Brooklyn by Bishop Robert Brennan. McCormack, then principal of Xaverian High School in Brooklyn, replaced Thomas Chadzutko. He oversees 70 Catholic elementary academies and schools, as well as 15 Catholic high schools throughout Queens and Brooklyn with a combined enrollment of 30,894.

The boy ran into the school and was taken by EMS personnel to NYC Health + Hospitals/Elmhurst.

Glendale resident Suzanne Ramos, 15, a member of Girl Scouts Troop 4015, received the Girl Scouts’ highest national award — the Medal of Honor — for using the Heimlich maneuver to save her younger sister from choking to death as the family sat down to dinner. Suzanne learned the procedure during her scouting instruction. She also received a proclamation from the City Council presented by Holden.

The mayor and City Council reached a deal on a record-high $101 billion budget for the fiscal year beginning July 1.

Despite cries from some quarters that the budget contained too many cuts, the city would not make it even three full months into the new fiscal year before Mayor Adams, at the end of September, issued the first of a series of orders requiring mid-year budget reductions intended to get the city to next June.

Gov. Hochul extended mayoral control of the city’s school system into law in quite literally the 11th hour as it was set to expire.

The legislation granted the expected two-year extension to Mayor Adams.