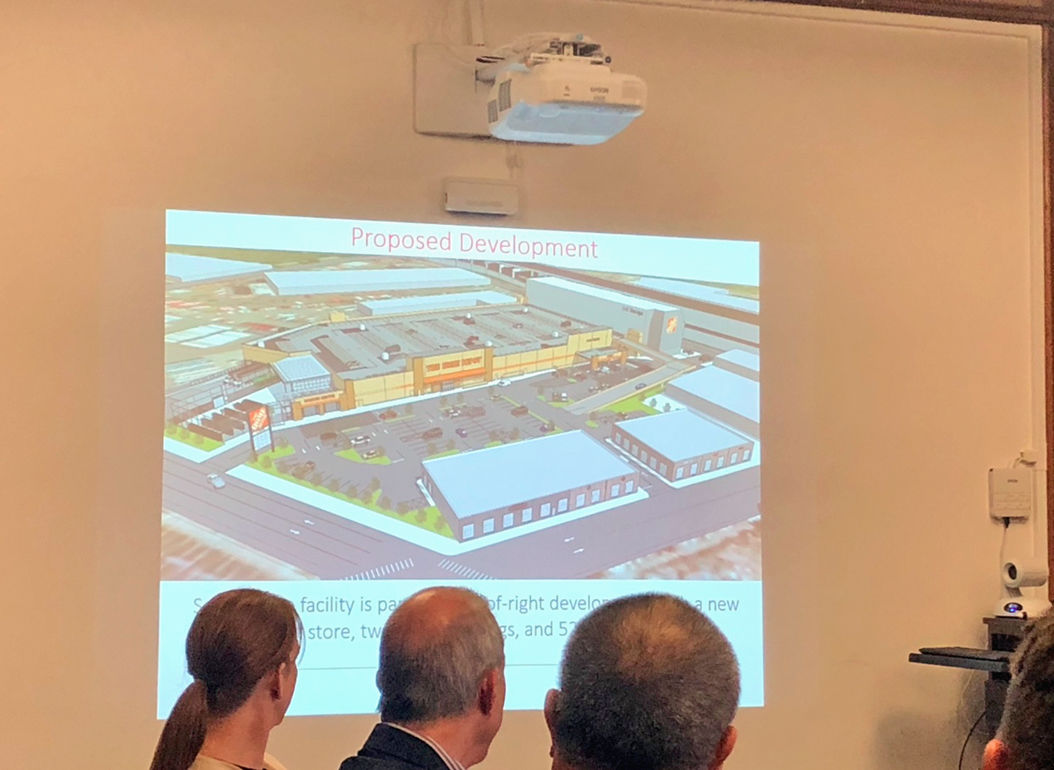 The Home Depot wants a special permit to build a self-storage facility at 59-02 Borden Ave. Its store is being constructed as of right and the company anticipates contractors and small businesses using the storage site, though critics say it will hurt the area. 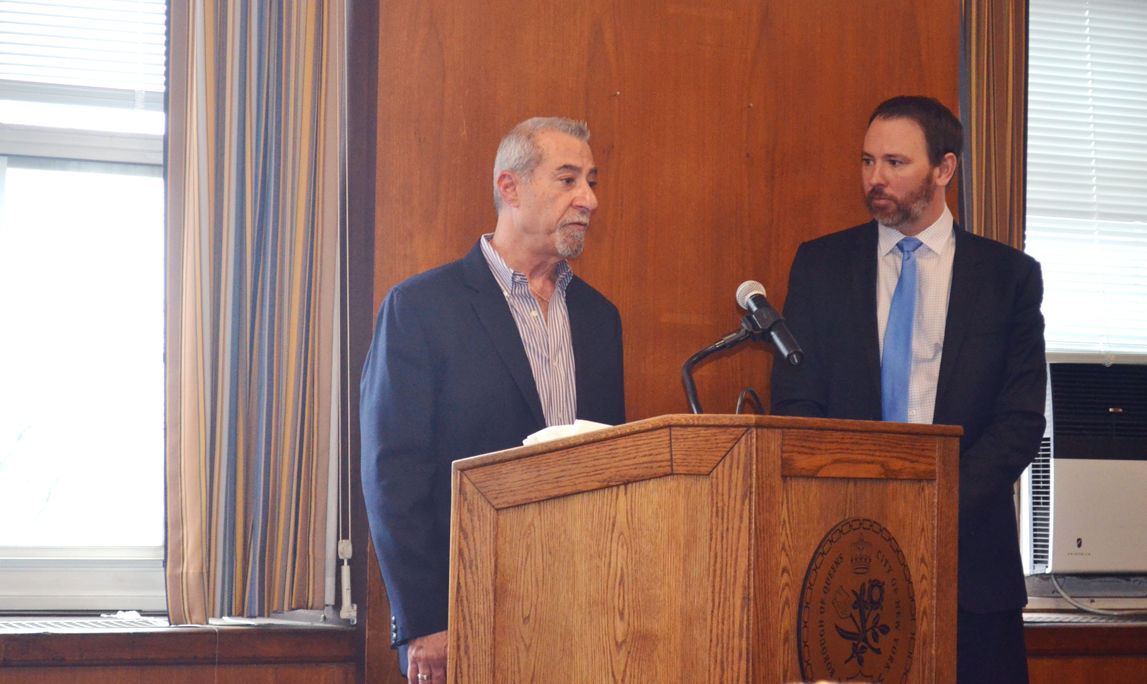 Bruce Talvy, left, of Home Depot and Joshua Rinesmith of Akerman LLP speak at Borough Hall as the company is looking to build a self-storage facility.

The Home Depot wants a special permit to build a self-storage facility at 59-02 Borden Ave. Its store is being constructed as of right and the company anticipates contractors and small businesses using the storage site, though critics say it will hurt the area.

Bruce Talvy, left, of Home Depot and Joshua Rinesmith of Akerman LLP speak at Borough Hall as the company is looking to build a self-storage facility.

The battle over a potential self-storage facility in Maspeth went to Borough Hall last Thursday, as Home Depot needs a special permit to build the six-story building.

The Home Depot is building as of right at 59-02 Borden Ave., the site of a former Coca-Cola bottling plant with two additional commercial buildings on the site. The company anticipates contractors and small businesses using the storage site but critics say industrial and manufacturing areas are hurt by the facilities.

Quincy Ely-Cate, of the Business Outreach Center Network, clarified he wasn’t against Home Depot’s as-of-right construction but opposes self-storage facilities “which consume land intended for industrial or manufacturing uses, creates almost no jobs and exacerbates the problem of businesses being priced out of the market.”

A self-storage facility in the city creates five jobs on average, according to the Department of City Planning, and the city wants to free up industrial business zones by requiring the facilities to apply for special permits in order to build.

Joshua Rinesmith of Akerman LLP noted the development will bring in hundreds of jobs but Ely-Cate said “almost none” are created by the self-storage site specifically.

“Including that figure within the special permit application is deceptive and convolutes the decision-making process for the community leaders,” Ely-Cate said.

The self-storage facility would be a long, narrow piece on the north portion of the 315,000-square-foot property.

The facility is “going to not only serve local residents but also a significant portion of it is going to serve local businesses,” Rinesmith said, adding that a lot of businesses don’t have enough money to lease out long-term spaces.

He gave an example of contractors ordering sinks and bathtubs months before they are installed.

He said there would be up to 500 permanent and seasonal jobs overall but didn’t know specifics when asked how many would specifically be at the self-storage site.

Speakers for and against the special permit showed up to testify.

Bishop Mitchell Taylor, founder and CEO of the Urban Upbound social service organization, said he sees the facility as an opportunity for the Maspeth community.

“One of the barriers small businesses have, especially in the construction field, is the ability to store their material,” he said. “They can’t afford warehouses, they can’t afford some of the things their counterparts have.”

But Darryl Hollon of the Business Outreach Center Network spoke against the special permit, saying self-storage facilities contribute to the displacement of small manufacturing and industrial businesses.

“I implore members of the Queens Borough President’s Office to stand with the community first and deny the Home Depot special permit,” he said.

It is not known which businesses would come to the site, though Home Depot construction manager Bruce Talvy said Starbucks and Verizon are being spoken to and that there will probably be a restaurant.

He said the site should be a “nice, vibrant center” where contractors can buy stuff and then visit the retail stores.

Talvy touted the Home Depot saying there are opportunities to climb the corporate ladder.

“In fact, some of our vice presidents were guys that got shopping carts in the lot and kind of grew through the organization. It’s that kind of a company. We take care of our people,” he said.

In February, Community Board 2 unanimously voted against the plan after its Land Use Committee supported it.

Rinesmith said the committee “understood the nexus between Home Depot and the store” but during the full board meeting the members went against it after hearing from speakers who said it should be used for traditional manufacturing.

Some of the speakers who addressed Acting Borough President Sharon Lee last Thursday spoke to CB 2 weeks earlier in making their argument.

The board said it would approve the permit if the company used the retail buildings for industrial use.

After the borough president, the special permit application will move on the City Planning Commission and the City Council as part of the Uniform Land Use Review Procedure.

Councilman Bob Holden (D-Middle Village) is in favor of the special permit, citing small contractors who could use the facility to contract local work.

“This has been a very convenient arrangement in other locations and I don’t anticipate any issues in Maspeth,” he said in an email.