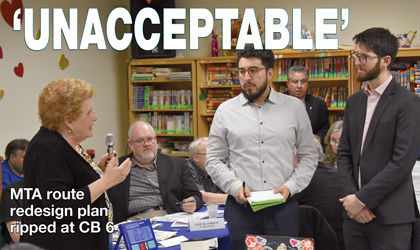 Councilwoman Karen Koslowitz speaks to MTA representatives Julian Bautista Rojas and Howard Levine about her displeasure with the agency’s Queens bus route redesign plan — which she called “unacceptable” during last Wednesday’s Community Board 6 meeting as Peter Beadle of the board’s Transportation Committee looks on. The proposal has been widely criticized by residents during workshops throughout the borough and by area lawmakers. 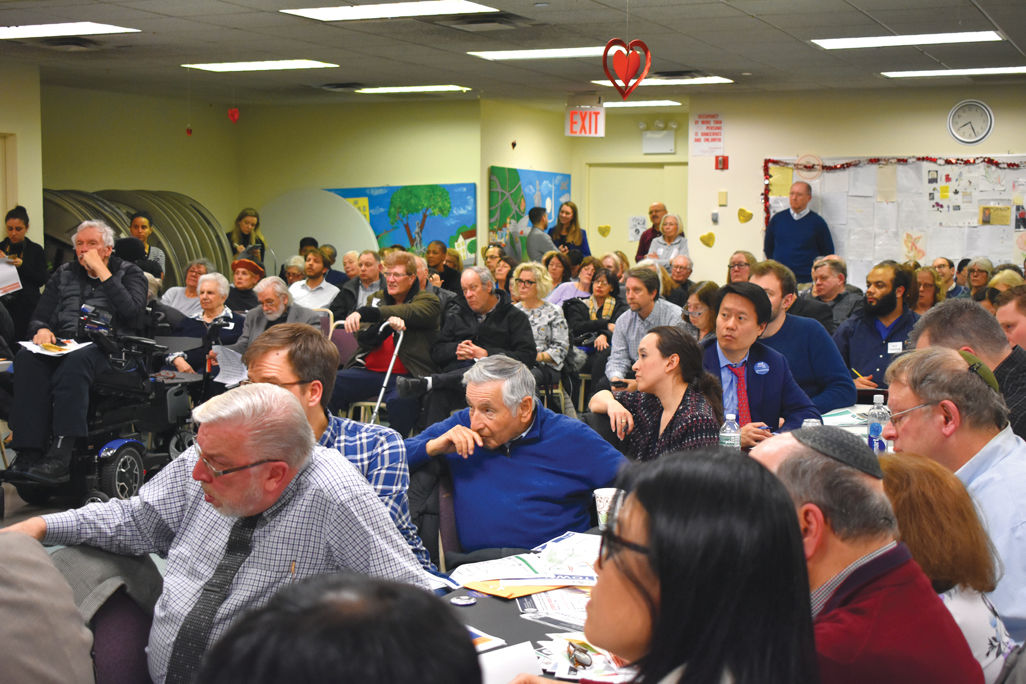 Community Board 6 members were joined by a large crowd at last Wednesday’s meeting as many voiced concern over the MTA’s proposed bus route redesign plan.

Councilwoman Karen Koslowitz speaks to MTA representatives Julian Bautista Rojas and Howard Levine about her displeasure with the agency’s Queens bus route redesign plan — which she called “unacceptable” during last Wednesday’s Community Board 6 meeting as Peter Beadle of the board’s Transportation Committee looks on. The proposal has been widely criticized by residents during workshops throughout the borough and by area lawmakers.

Community Board 6 members were joined by a large crowd at last Wednesday’s meeting as many voiced concern over the MTA’s proposed bus route redesign plan.

The agenda at the Feb. 12 Community Board 6 meeting was dominated by a discussion — an outright protest, really — of the proposed Queens Bus Network Redesign plan.

Those in attendance, including board members and an unusually large turnout of concerned area residents, seemed determined to make the MTA and NYC Transit rethink the proposal, which would see the borough’s entire bus network scrapped and a totally new one implemented.

Echoing residents across the borough who have spoken at meetings on the proposal, Councilwoman Karen Koslowitz (D-Forest Hills) declared she is “against this plan,” saying, “This plan doesn’t take in the needs of my community.”

Among the issues she raised was the potential re-routing of the Q60, which would no longer go to Manhattan. She called the idea “unacceptable. You can’t have people get on a bus and go to Long Island City, get off and go on a ferry that’s not taking them to any place that they wanted to go. The Q60 stop goes to 60th and Second Avenue. The ferry does not go there.”

And Koslowitz complained that proposed changes to the Q23 would similarly inconvenience riders. “Many people in Forest Hills don’t take the bus to Little Neck,” she said.

And she pointed out that “we have elderly people ... disabled people ... children that take the bus. We don’t want to send our people on a wild goose chase.”

A presentation by MTA representatives Howard Levine and Julian Bautista-Rojas highlighted the agency’s draft plan, which was released in December and for which, according to the reps, there is, as of now, no planned implementation date.

As the MTA sees it, the changes would result in more direct routings to simplify the network, more balanced bus stops (involving a change in local bus average stop spacing from 850 to 1,400 feet), enhanced connectivity and increased frequency of buses.

But as CB 6 member Chris Collett sees it, it’s simply “flat out cruel.” Collett, who also serves as president of the Forest Hills Community and Civic Association, decried the lack of outreach to the community and said, “We don’t understand what you’re doing.” He suggested that the MTA has “some hidden agendas.”

Other criticisms came at a fast and furious pace, some regarding the process and others concerning the plan itself.

Board member John Dereszewski believed that “there is a fatal methodological flaw with the entire thing. You’re supposed to look for what’s there and then make modifications. By making tweaks in the system you’d be able to have change and continuity at the same time.”

Fellow member Naomi Altman told the speakers, “You handed out information that shows the new routes. You do not show the comparison and the replacements for those routes. How is anyone going to make an honest decision and a knowledgeable decision?”

Longtime Forest Hills resident and board member Miriam Berfas said, “When I heard your presentation, I had to think to myself, ‘Am I hearing correctly?’ When you want to improve a situation, you don’t make things more difficult. You try to make them less difficult.” She added, “You are going to have to re-educate the people who have been taking these buses all along as to where these new routes are; that’s going to be a whole project in and by itself.”

Concerned citizen JP Freeley questioned the timing of the project. “Why don’t we wait ... until the 2020 Census data comes out?” he said. “So much of this plan has been based on the 2010 Census.”

Freeley categorized the public outreach on the project as “a bit of a joke.” To the MTA representatives, he said, “You have 700,000 people a day that ride Queens buses. Sending out 11,000 brochures and 2,000 online surveys is not really reaching the public.”

Area resident Helen Gitelson said she rides the buses every day. “You never asked me or anybody else on my bus why we’re there, what we need,” she said. “I’m not quite sure why you’re doing this, but the problems you mentioned may also be solved by not only rerouting the buses but by eliminating parking, redeveloping streets, taking additional space from sidewalks. Those are the kinds of things you may wish to use.”

Along the same lines, Forest Hills resident Judy Berman suggested the MTA “go to the senior centers. Ask all the seniors who come every day,” and said, “They’re very worried” about the potential changes in service.

Several speakers directly addressed their concerns over some of the possible changes. Board member Heather Dimitriadis complained that “there has been very little discussion about express buses. Folks who are working who are older do afford themselves that luxury.” She advised the MTA to study “how neighborhoods move, how people move within the neighborhood.”

In many cases, proposed changes would seemingly take riders way out of their way.

Board member Pat Morgan was particularly concerned about the proposed changes to the Q60. “I’m disabled,” she said. “This will make it impossible for me to go into Manhattan easily. The idea of stopping the Q60 and putting people on ferries ... you have people who get motion sick, you have people who are afraid of boats, you have individuals who just don’t want to do that.”

The Q60 works just fine as it is, she said, suggesting, “Just work on the congestion, work on the timing. The Q60 has worked longer than the two of you have been alive.

“We can’t use the majority of the stops in this community because they are not [Americans with Disabilities Act]-accessible for us. So talk to us, please,” she said.

Board member Jean Silva would also be impacted by the redesign. “I use a scooter. I will now have to take my scooter, and probably cart it across the bridge and stop the traffic or pack my scooter up, put it on my back, walk up the stairs, get on the train, go across, come down and take the Second Avenue bus. This is asinine,” she said.

Forest Hills resident Claudia Valentino suggested that the MTA “took no account of the physical situation that the Q23 travels along. The Q23 is the spine that connects our community to schools, houses of worship, doctors and other medical services that we frequent.

“My travel time has nothing to do with the time I spend on the bus. It’s from the time I walk out my door to get to where I’m going,” she said. “You’re putting the travel time on me. You’re making my commute much longer, you’re making me wander all over in the dark.”

Gitelson also inquired as to what kind of environmental impact assessments the MTA is conducting: “The change in buses affects our neighborhoods not only in the routes; it affects the congestion on our streets; it has the potential for significant adverse impact on the economic conditions in our neighborhood.”

Chain was among several people who made reference to the plan to have the new QT 87 travel along Ascan Avenue in Forest Hills Gardens.

Her sentiments were seconded by Tony Barsamian, president of Forest Hills Gardens Corp., which oversees the community. “I have to assume that the [QT 87] routing on Ascan Avenue is an inadvertent error because these are private streets and it’s private property. You wouldn’t go through people’s living rooms or dining rooms or backyards.”

The lone dissenter appeared to be area resident Steve Strauss, who said, “We need to have connections between Metropolitan Avenue and Queens Boulevard,” which are directly linked by Ascan Avenue.

Here's a few other points to consider:

+ why not Wait another year for updated Census data

+ Census data doesn't ask about buses AND subway.. It's either or. (pg 12 existing conditions report)

+ Q60 only to LIC imagine Subway only to queens Plaza?? -- Imagine if the E&F stopped at Queens Plaza and you needed to switch trains?

+ 1st, before bus changes, Fix ALL subway stations to be ADA compliant not just 20

Implement MTA Trip planner+ to allow new vs old comparisons.. And do it NEXT WEEK

Here are a few other points to consider:

+ why not Wait another year for updated Census data

+ 2010 Census data doesn't ask about buses AND subway.. It's either or. (pg 12 existing conditions report)

+ Seven stops are proposed to serve FH south of QB vs 20 stops on the old Q23 - https://photos.app.goo.gl/s9MBJoFCmFbVJPUD7

- It achieves high marks for route productivity (pg 123) and

+ Q60 to stop at LIC is like Subway only to queens Plaza?? -- Imagine if the E&F stopped at Queens Plaza and you needed to switch trains?

+ Before redesigning of the system, Fix ALL subway stations to be ADA compliant not just 20

+ We need a proper route tool such as MTA current trip planner.

- MTA Trip planner would allow new vs old comparisons.. And do it NEXT WEEK

+ Great subway visualization when train delayed - we have the technology to do this for busses -- implement technology -- https://youtu.be/eShtZSx4kWc

Sign the petition to stop the elimination of half the bus stops.