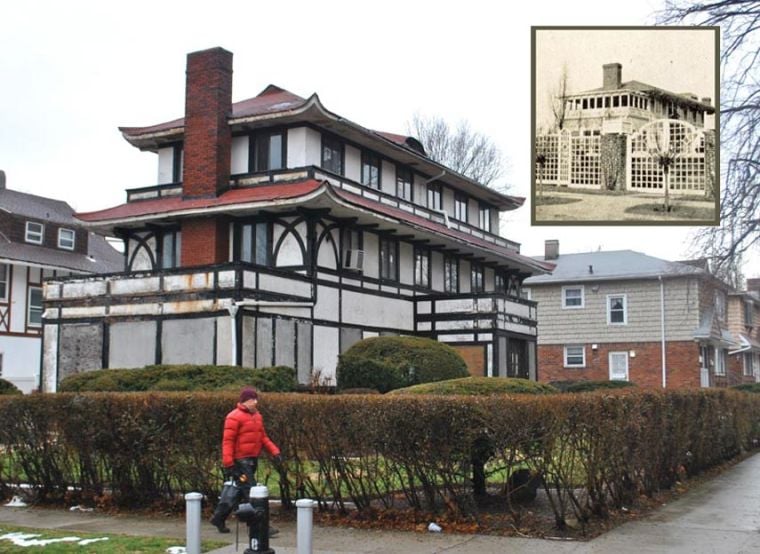 The decaying house at 84-62 Beverly Road in Kew Gardens was once the home of flower mogul Joseph Fleischmann’s daughter in the 1930s. Reportedly the only Anglo-Japanese-style home in Queens, it has sat vacant for years, inset. 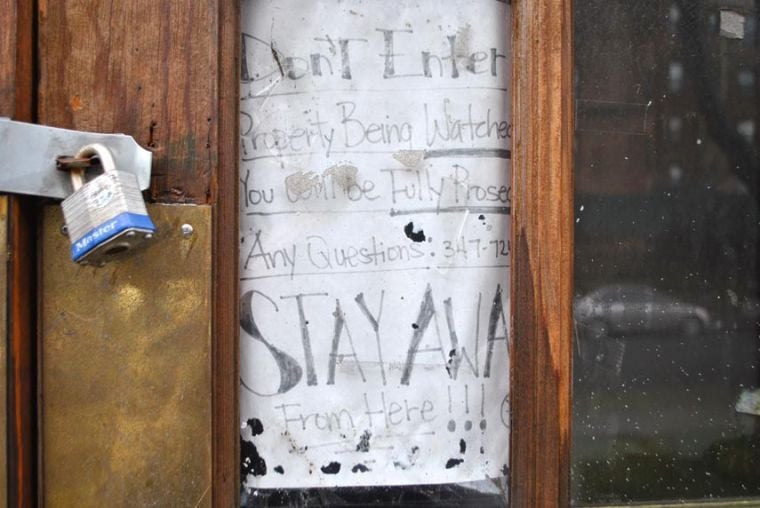 A sign warning people to stay away from the home or face arrest is taped to the inside of the front door. The listed phone number is no longer in service.

The decaying house at 84-62 Beverly Road in Kew Gardens was once the home of flower mogul Joseph Fleischmann’s daughter in the 1930s. Reportedly the only Anglo-Japanese-style home in Queens, it has sat vacant for years, inset.

A sign warning people to stay away from the home or face arrest is taped to the inside of the front door. The listed phone number is no longer in service.

A former resident of what he says is the borough’s only Anglo-Japanese-style home is furious at the vacant building’s ongoing descent into decay and dilapidation.

The home, located at 84-62 Beverly Road in Kew Gardens, looks more like the setting of a horror movie than a historic, nearly 100-year-old piece of significant architecture.

The windows have been sealed with concrete and a mysterious sign is taped to the inside of the front door’s glass windows, warning any intrigued passersby to “stay away,” that the property is “being watched” and any trespassers will be arrested.

A phone number was on the sign, but a message saying the number is out of service was heard when called by the Chronicle.

As spooky as the abandoned house appears, its sealed, cement-filled windows can be easily explained.

Two unsafe building violations were issued by the Department of Buildings on Sept. 26, 2009, but Mun Chang, listed as the home’s owner since 1973, never appeared in court or attempted to fight the tickets.

A court order to seal the home was issued on Jan. 6, 2010 and the Department of Housing Preservation and Development closed the windows with cement shortly after.

“The main house and garage at this location were sealed as a result of an unsafe building procedure initiated by the Department,” Buildings press secretary Kelly Magee said. “We initiated the proceeding and the Department of Housing Preservation and Development completed the work of sealing the building.”

James Melikian, who lived in the home as a young child from 1956 to 1969 with his family, works to save historic buildings in Arizona, where he now lives.

He told the Chronicle in an email that every time he visits Queens, he is upset to see his childhood home in shambles.

“Whenever we visit New York City, we try to drive past our former Beverly Road home and are always saddened to see it in such disrepair after knowing its great history and distinct architectural beauty,” Melikian said. “This Anglo-Japanese-style house ... is the lone survivor of three such houses that stood at that intersection.”

The plot containing Melikian’s childhood home is rich with over 75 years of history.

The building was constructed by Joseph Fleischmann, a florist who became a millionaire after developing a flower shop franchise with stores in Chicago and Washington DC, for his daughter to live in, according to Queens historian Carl Ballenas.

While Ballenas did not know the exact year the home was built, he believes it has existed since before 1938.

Originally, there were three such homes on the lot. The main one, called the Fleischmann Mansion, was torn down in 1939, and the surviving home’s sister structure was torn down in the mid-1960s.

The house is described as Anglo-Japanese because of its meshing of 19th-century English and Japanese architecture, and is the only Queens building featuring such a design, according to Melikian.

Collectively, the two distinct styles combine to form one of Kew Gardens’ most unique homes.

“It has a Japanese temple look to it,” Ballenas said. “It must have been phenomenal to look at back in the day.”

Today, the bricks of the walkway leading to the front entrance are cracked and out of place.

Wires dangle from the home’s right side, while a gutter hangs loose and leaks water on the building’s left side.

Through the window of the front door, a dirty, fraying wood floor can be seen, and the walls of the entryway appear blanketed in dust.

Melikian, whose Queens ties date back 90 years to his father’s upbringing in Sunnyside and his mother’s immigrating to Forest Hills, has made a living off saving aging historic buildings in the Phoenix area.

Unfortunately, it appears the home that holds chapters of his own personal history may be past the point of rescue.

“We have seen many great historic homes and buildings lost here in Phoenix,” he said. “We hate to think that maybe one day ... the home that inspired our love of historic properties might join that list.”