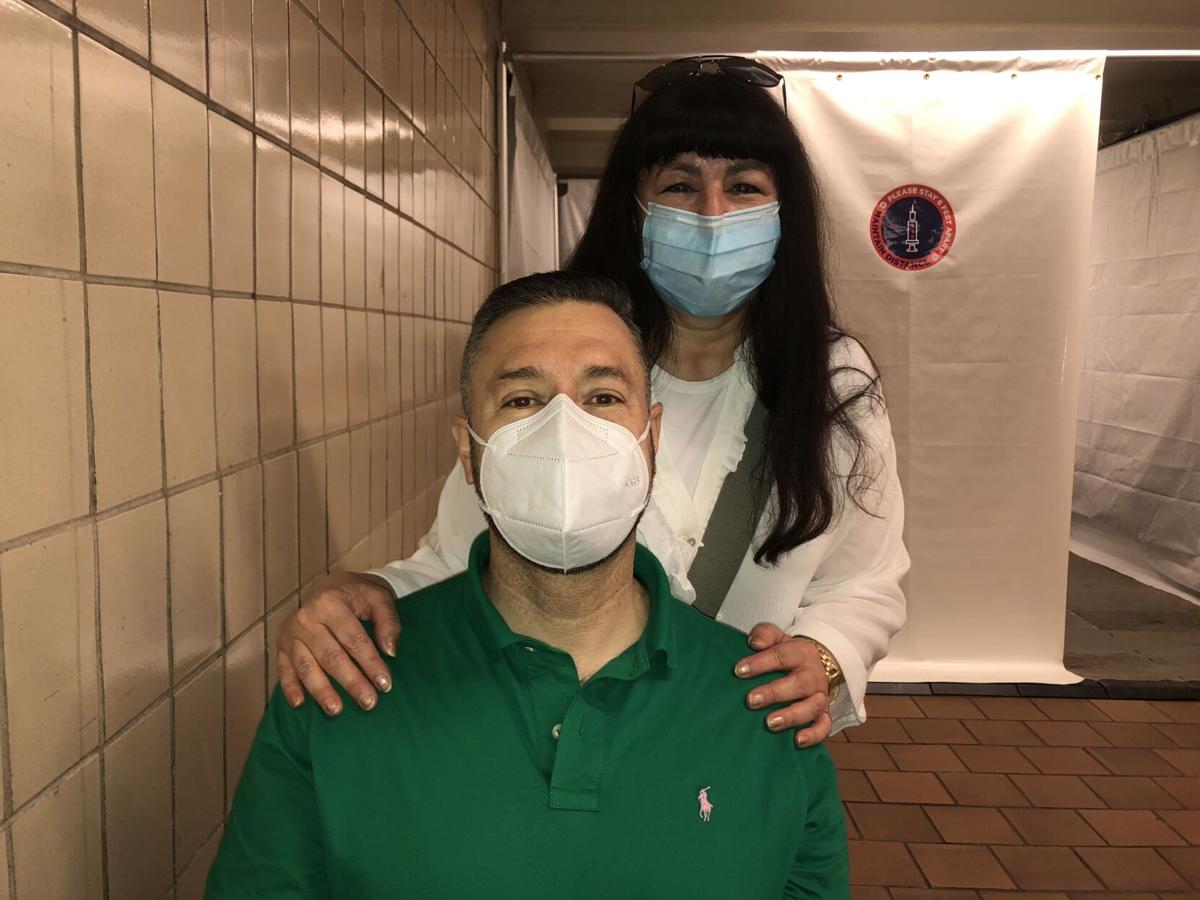 Jorge Duran, front, accompanied by Janet Barragan, 61, flew from Bogota, Colombia to get a vaccine in the U.S. because there are not enough vaccines in his country. He hopes there are more pop-ups at new sites in the future. 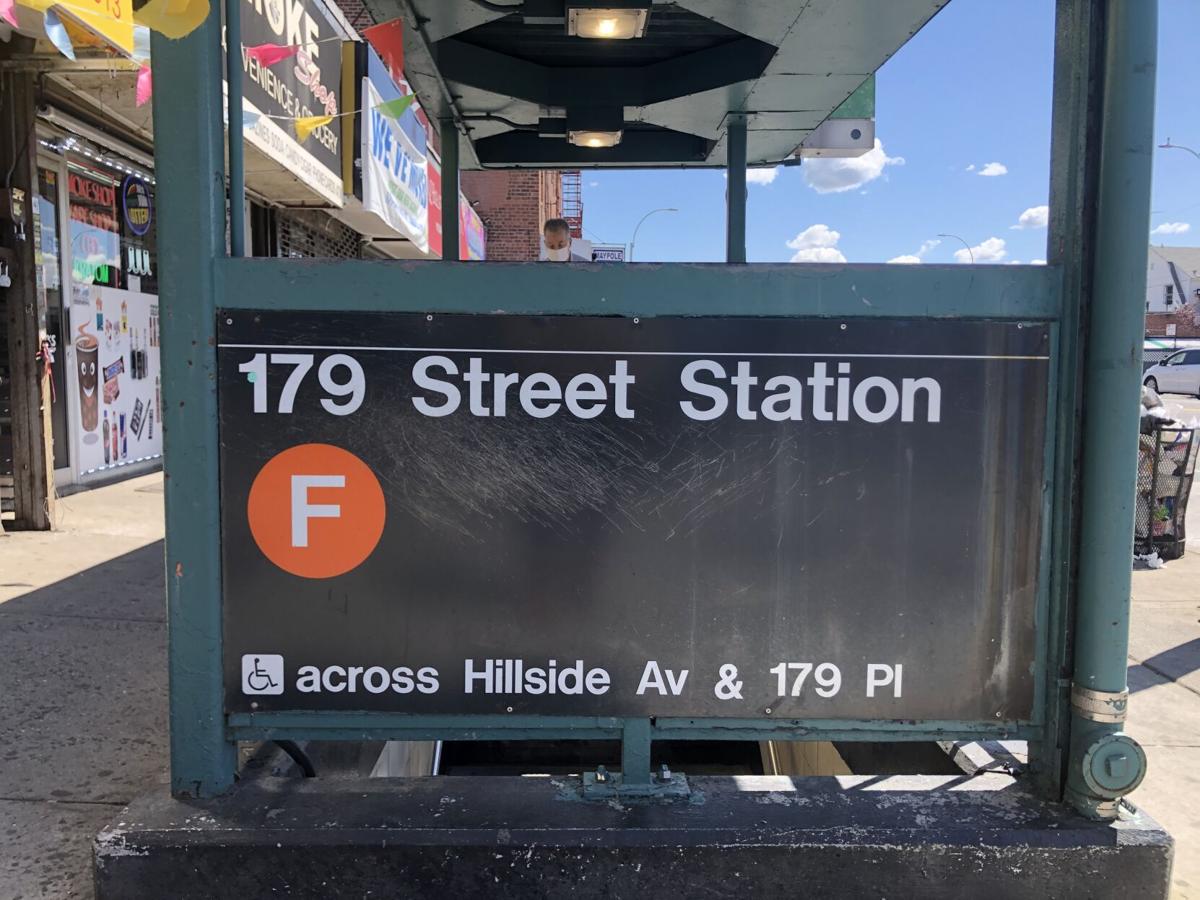 Residents of Southeast Queens can go to the 179th Street subway station to get a Johnson & Johnson vaccination, and in exchange they'll receive a free MetroCard.

Jorge Duran, front, accompanied by Janet Barragan, 61, flew from Bogota, Colombia to get a vaccine in the U.S. because there are not enough vaccines in his country. He hopes there are more pop-ups at new sites in the future.

Residents of Southeast Queens can go to the 179th Street subway station to get a Johnson & Johnson vaccination, and in exchange they'll receive a free MetroCard.

Gov. Cuomo is determined to curb the spread of the coronavirus in the Empire State and has enlisted the Metropolitan Transportation Authority to close the gap by offering free rides on the subway, Long Island Rail Road or Metro-North to those who get vaccinated at eight pop-sites within the transportation system.

Healthcare workers are administering the single dose Johnson & Johnson vaccine from May 12 to May 16, according to the MTA. It is open to the first 300 people who come each day on a first-come, first-served basis.

“New Yorkers may struggle to take time out of their schedules to get the vaccine, so we’re bringing it directly to them at these new sites in MTA stations,” said Cuomo. “The more New Yorkers are vaccinated, the safer our state is for everyone.”

The initiative includes sites at Penn Station at the 34th Street Corridor; Broadway Junction in Brooklyn; the Ossining Metro-North terminal in Westchester; and the Hempstead Long Island Rail Road station, each from 3 p.m. to 8 p.m.

“The process could not be any easier,” said MTA Chairman Patrick Foye. “Driving up the vaccination rate is key to reopening strong and rebuilding back better. I’m bullish on New York and I know we can rise to the challenge if we all pull together.”

Michael Walker, a St. Albans resident, has cleared his Saturday to head to the 179th Street subway station so that he’ll be safe at the private school he works at in the Upper West Side.

“I’m off of work today, but I don’t want to get sick tonight from side effects if I have to go in later,” said Walker, a security guard. “I heard different things about the Johnson & Johnson vaccine, but it is up to you. It’s up to your immune system.”

The Johnson & Johnson vaccine was briefly paused from being administered in April after six women developed blood clots, according to the Food and Drug Administration.

“I don’t see what the hoopla is for,” said Walker, 59. “I have to be safe because I’m interacting with kindergarten to 12th-grade. Plus there were millions more that got the shot.”

Before the Johnson & Johnson shot was paused, over 6.8 million people took the vaccine, according to the FDA.

Janet Barragan, 61, from Fresh Meadows was at the 179th Street subway station May 13, accompanying a relative who flew all the way to the United States to get vaccinated.

“I actually came in to accompany my husband’s cousin who came in from Colombia to get the vaccine,” said Barragan. “In Colombia, the vaccine is very scarce. This announcement happened this week and he happened to arrive yesterday, so perfect timing.”

Barragan was vaccinated three weeks ago and is happy with her decision. She hopes that her cousin-in-law Jorge Duran, 52, a lawyer from Bogota, gets the same sense of security that she feels from getting a shot.

“He thinks it is a great program and that it should be expanded to other areas, and even other countries,” translated Barragan. “He is very thrilled by the idea that you are just able to come to the train station. It was very easy.”

At least 75 people went to the 179th Street subway station on launch day, and another 75 have since got vaccinated by noon, according to an MTA official who was at the site on Thursday.

The eight sites the governor and the MTA selected were chosen because of the low vaccination rates in those areas, according to the official.

“Anyone passing through any one of these stations, New Yorker or not, can walk up, register, get their shot, sit down for the standard 15-minute waiting period afterwards and then be on their way,” said Foye.