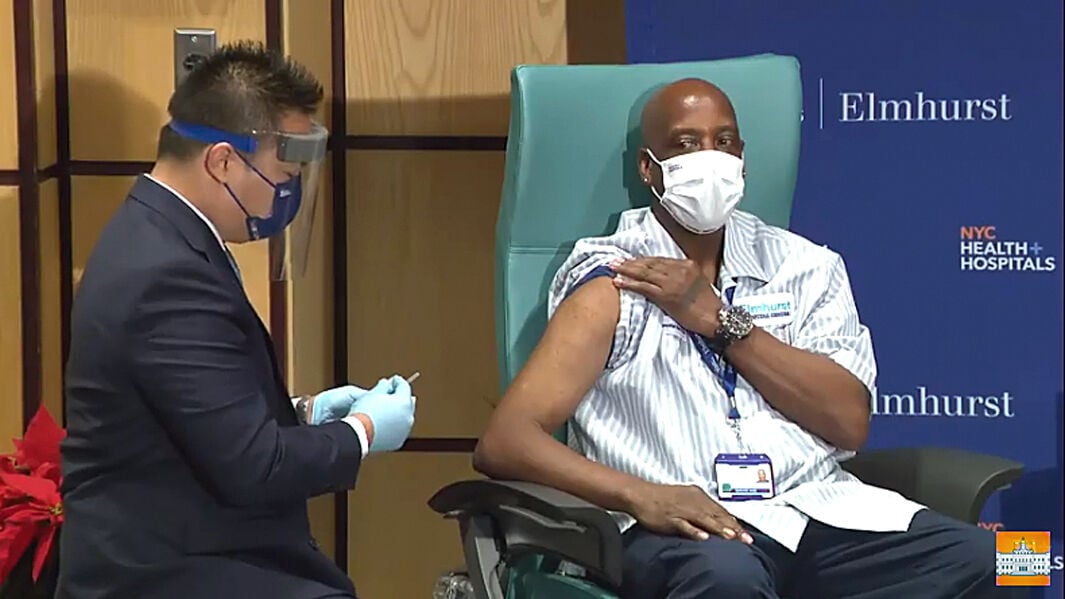 Dr. Eric Wei of NYC Health + Hospitals/Elmhurst injects healthcare worker William Kelly with the Covid vaccine. Kelly and Veronica Delgado became the first two healthcare workers vaccinated at the public hospital considered to be the “epicenter of the epicenter.” 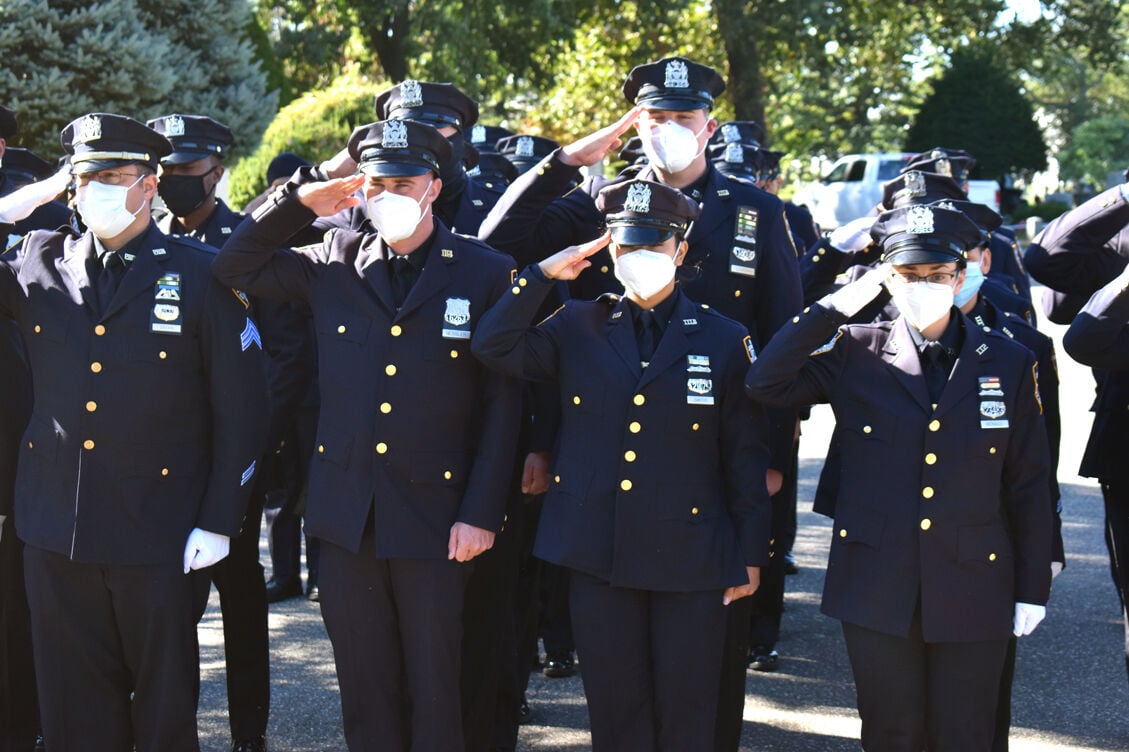 Members of the NYPD paid tribute to two officers killed in the line of duty around 100 years ago during a ceremony at Mount Olivet Cemetery in Maspeth. Robert Henry Holmes and Ale Swider were remembered on National Thank a Police Officer Day. 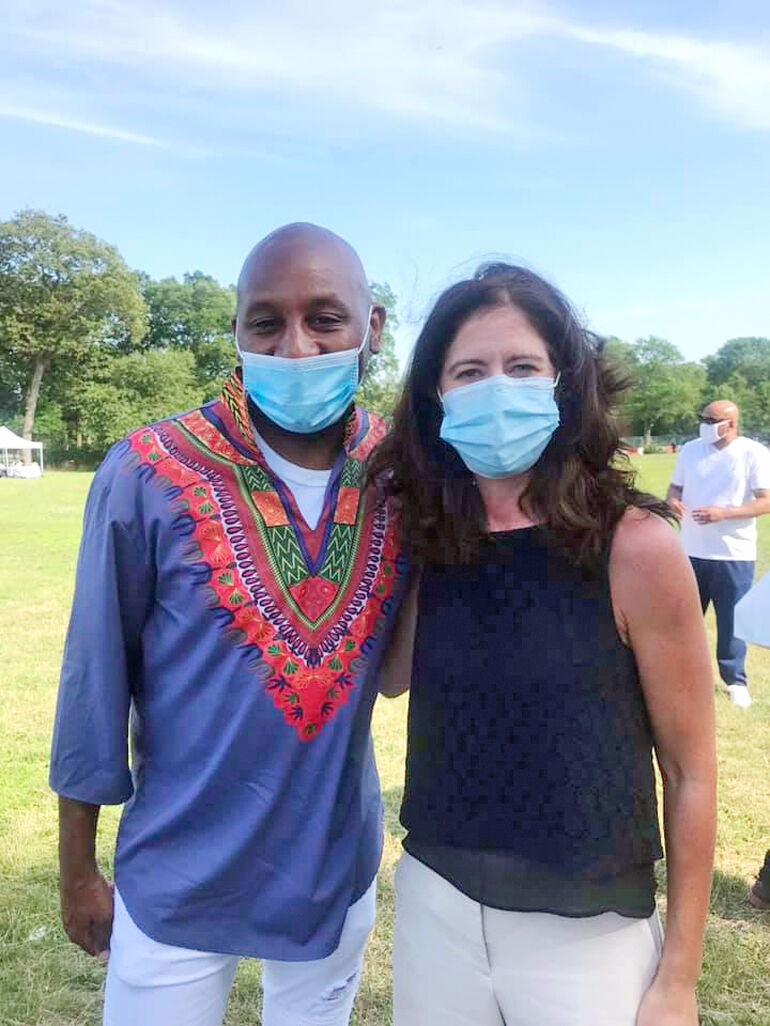 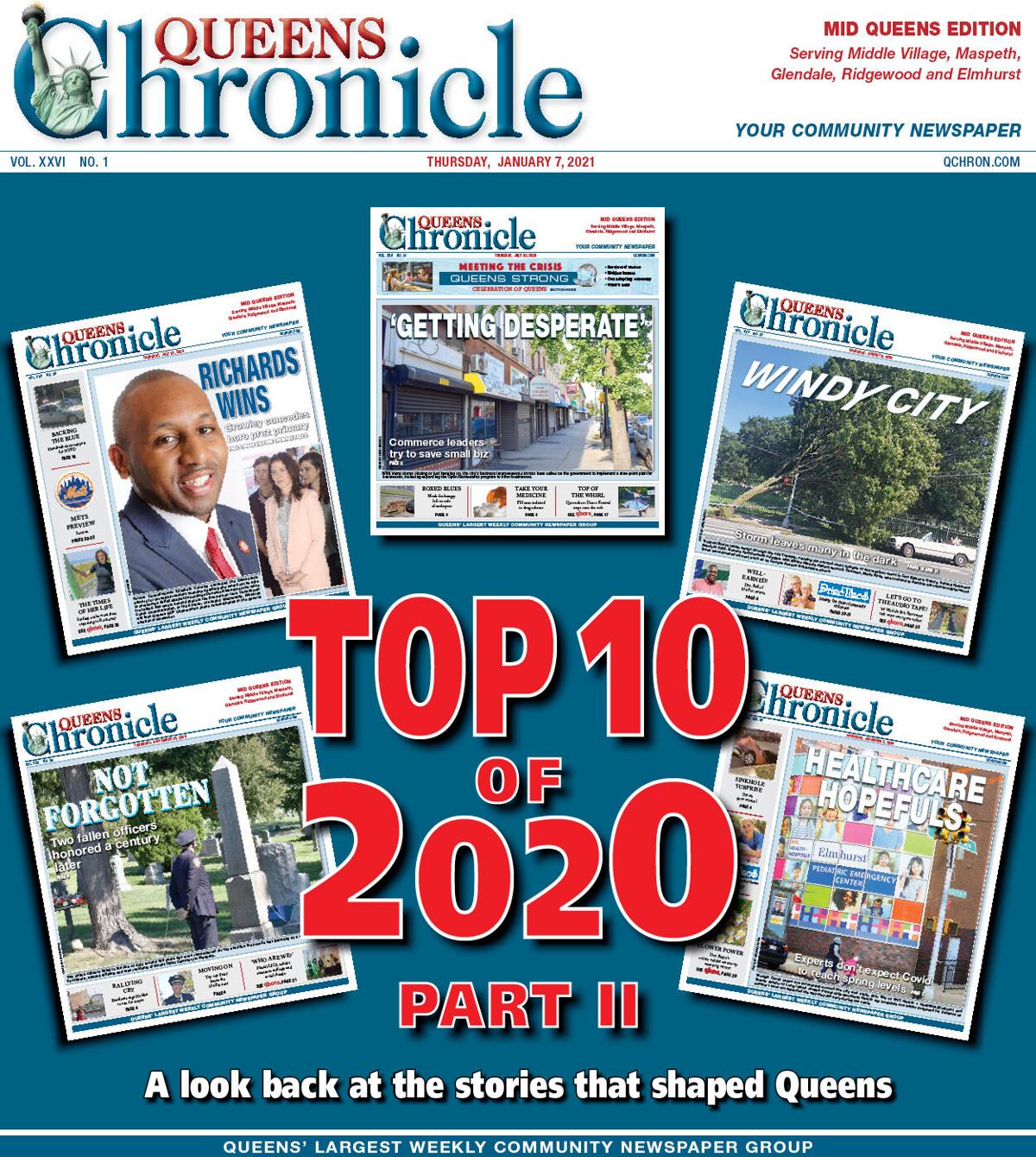 Dr. Eric Wei of NYC Health + Hospitals/Elmhurst injects healthcare worker William Kelly with the Covid vaccine. Kelly and Veronica Delgado became the first two healthcare workers vaccinated at the public hospital considered to be the “epicenter of the epicenter.”

Members of the NYPD paid tribute to two officers killed in the line of duty around 100 years ago during a ceremony at Mount Olivet Cemetery in Maspeth. Robert Henry Holmes and Ale Swider were remembered on National Thank a Police Officer Day.

The city was still battling Covid hard at the start of the summer but by the end of the year there was some light at the end of the tunnel as vaccines began to be distributed.

A tropical storm tore through the borough in August, the worst since Hurricane Sandy eight years earlier.

Former Borough President Claire Shulman died in August and former Mayor David Dinkins died in November. Both were in their 90s.

A statue of the Blessed Mother at Cathedral Preparatory School and Seminary in Elmhurst was vandalized with the message “Idol” on the statue. The graffiti was cleaned off several hours later.

Vincent Maltese, brother of former state Sen. Serphin Maltese, died at 86. A familiar face in the community, he served on the Ridgewood Community Board of Directors. He was also a member of the Italian Charities of America, in addition to several other groups.

Councilman Donovan Richards (D-Laurelton) got the Democratic nomination for borough president as former Councilwoman Elizabeth Crowley conceded the primary. Crowley was in second place in a five-person field and determined she would not be able to make up the difference as absentee ballot counting continued.

Mayor de Blasio signed into law a six-measure NYPD Accountability Package, which included the criminalization of the department utilizing chokeholds.

More than 30 boxes of food meant to feed the needy were found dumped on the side of an underpass in Middle Village. The city’s Sanitation Department, in charge of transporting the food, called it “unacceptable.”

Legal advocate Juan Ardila announced his campaign for the City Council seat held by Councilman Bob Holden (D-Middle Village). Ardila worked as an office manager for Councilman Brad Lander (D-Brooklyn), at the International Rescue Committee, which provides humanitarian aid, and as a consultant for the Department of Education. Ardila later picked up an endorsement from the Working Families Party.

The Rev. Francis Hughes of St. Pancras in Glendale was charged with one count of receipt and distribution of child pornography after allegedly sexting with a teenager. The FBI also said he admitted to a separate sexual encounter at a high school.

Tropical Storm Isaias ripped through Queens on Aug. 4, causing the second-biggest power outage in Con Ed’s history, behind only Hurricane Sandy in 2012.

Det. Thomas Bell of the 104th Precinct retired after 21 years on the force, the last 20 in the Ridgewood-based command.

Former Queens Borough President Claire Shulman died at 94 after a bout with cancer. Shulman, the first woman to hold the post, served from 1986 to 2002. She was praised for improving housing, healthcare, infrastructure and the arts.

“No one loved Queens more than Claire Shulman, and in turn, she was widely respected and deeply loved,” said Acting Borough President Sharon Lee.

The 9/11 Memorial and Museum reversed its decision to cancel the annual Tribute in Light display, following pressure from several councilmembers and backlash from constituents. The museum said the two columns of light would not shine this year due to pandemic concerns. Ten city councilmembers, including Holden, Peter Koo (D-Flushing) and Paul Vallone (D-Bayside), wrote a letter to President Trump asking for assistance to erect the tribute. Gov. Cuomo announced that the state would provide health personnel to allow the display to happen safely.

Shiro’s of Japan closed at The Shops at Atlas Park in Glendale after 14 years in business at the mall.

On National Thank a Police Officer Day, two officers killed in the line of duty around 100 years ago were remembered at Mount Olivet Cemetery in Maspeth. Tribute was paid to Robert Henry Holmes, the second black NYPD officer in the department’s history, who was shot in 1917, and Ale Swider, who died from injuries sustained riding his motorcycle in a collision with a taxicab in 1923.

Ramon Pena was indicted on murder charges for a June hit-and-run crash that killed 25-year-old Hamlet Cruz-Gomez in Middle Village.

Around 40 members of the community rallied in Maspeth to call on Holden to run for mayor in 2021, while 20 counterprotesters arrived and criticized the lawmaker. Holden, who did not attend, said he would instead seek re-election for his City Council seat.

The lease on the library at Atlas Park in Glendale, which had been closed since mid-March, expired at the end of the month and was not extended. Construction on the library about 10 blocks away on 73rd Place is expected to be completed in spring 2021.

Officer Baimadajie Angwang of the 111th Precinct was arrested by the FBI on charges of acting as a Chinese spy.

Indoor dining reopened in the city at the end of the month at 25 percent capacity.

Our Lady of Hope in Middle Village held its blessing of the animals. About 50 canines, a handful of felines and at least two hamsters were sprinkled with holy water, with the event held on the Feast of St. Francis, the Catholic patron saint of animals.

Former Councilman Tom Ognibene was commemorated with a garden at Juniper Valley Park. Councilmen Eric Ulrich (R-Ozone Park) and Holden helped make the tribute to one of their mentors a reality.

On the same afternoon at the park, Columbus Day was celebrated, with elected officials and community residents coming out to celebrate Italian heritage.

Middle Village business owners voiced concerns about constant inspections from city agencies. One business owner, for example, said visits from the Department of Health and Department of Buildings went fine, and then an inspector from Consumer Affairs wrote a summons for not having distancing tape on the floor.

Two Ridgewood youngsters, Jacob Altamarino and Jamie Longo, were honored with citations by the borough president for their work in helping distribute food and feminine hygiene products in the area.

NYC Health + Hospitals/Elmhurst unveiled a mural in its lobby, celebrating frontline workers and the community.

Members of the Elm Community Charter School broke ground on its new location at 79-20 Queens Blvd. in Elmhurst.

City schools were closed as the rate of people citywide testing positive for the coronavirus over a seven-day period surpassed the 3 percent rate de Blasio set for triggering the closure of all school buildings. The closure forced all hybrid students to adopt an all-remote learning schedule.

Music club Blackthorn 51 closed its doors after eight years in Elmhurst, though owner Nicki Camp said he would like to open in the area down the line.

David Dinkins, the first and thus far only African-American mayor in city history, died at 93. Dinkins, who embraced New York City as a “gorgeous mosaic” was mayor from 1990 to 1993.

A Toyota was swallowed by a sinkhole in Maspeth on Thanksgiving morning. Nobody was in the vehicle that made national news with the car going vertical before being removed several hours later.

Richards was inaugurated as borough president at Borough Hall.

Dahe Lin, 77, was sentenced to 21 years in prison for manslaughter. The Ridgewood senior stabbed his daughter-in-law in the neck in March 2019.

Looking to limit Covid spread, Cuomo closed indoor dining in city restaurants, though other parts of the state were allowed to continue at 25 percent capacity.

Veronica Delgado and William Kelly became the first two employees at NYC Health + Hospitals/Elmhurst to be injected with the Covid vaccine, though some officials wondered why Northwell LIJ Medical Center in Glen Oaks received it first.

Hall of the 104th Precinct addressed noise complaints in the area, including loud music from cars and loud engines. The commander said Patrol Borough Queens North has a drag racing task force out from 6 p.m. to 2 a.m. on Fridays, Saturdays and Sundays, with one officer from each precinct responding to whichever area is having an issue.

Holden announced he will run for re-election for his Council seat in 2021.