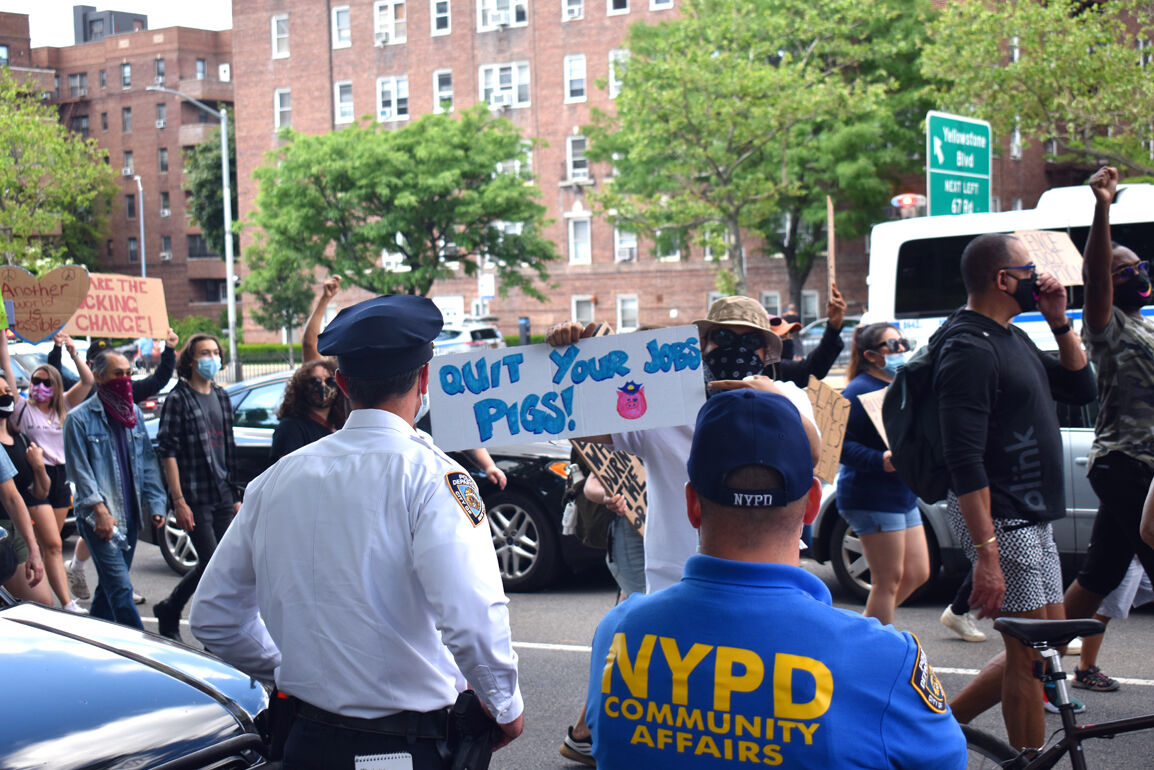 Protesters rallied against police brutality following the killing of George Floyd by Minneapolis police in late May. Forest Hills saw a number of peaceful protests, unlike others that took place around the city and country. 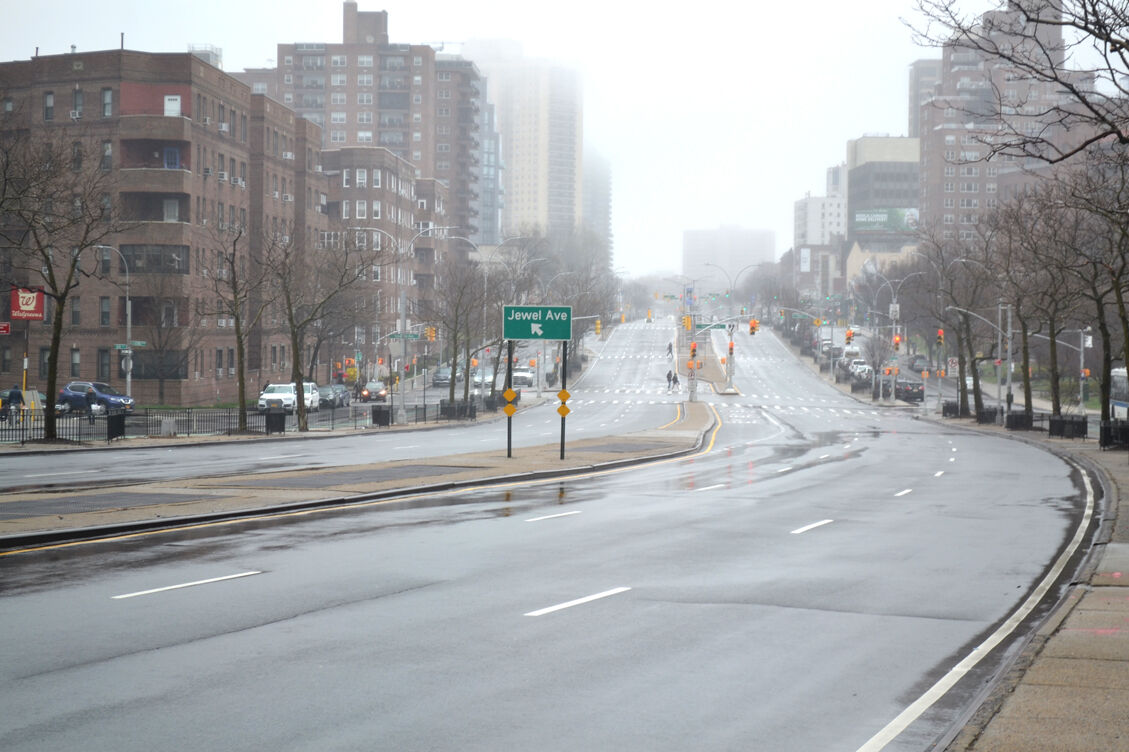 Even on a Sunday afternoon in the spring, Queens Boulevard remained largely quiet because of restrictions meant to limit the spread of Covid. 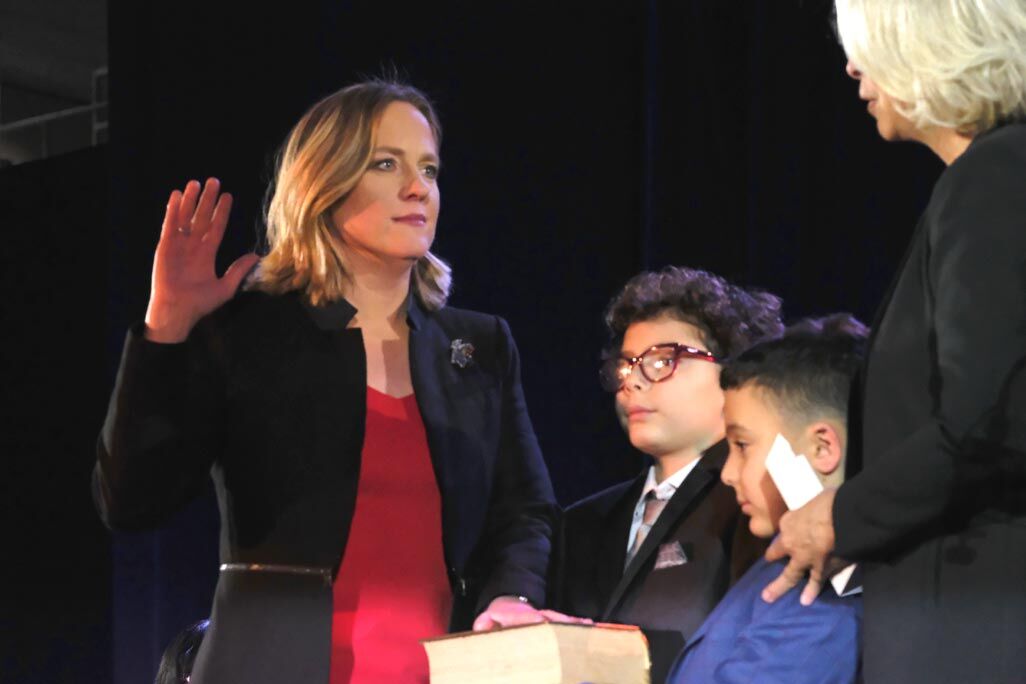 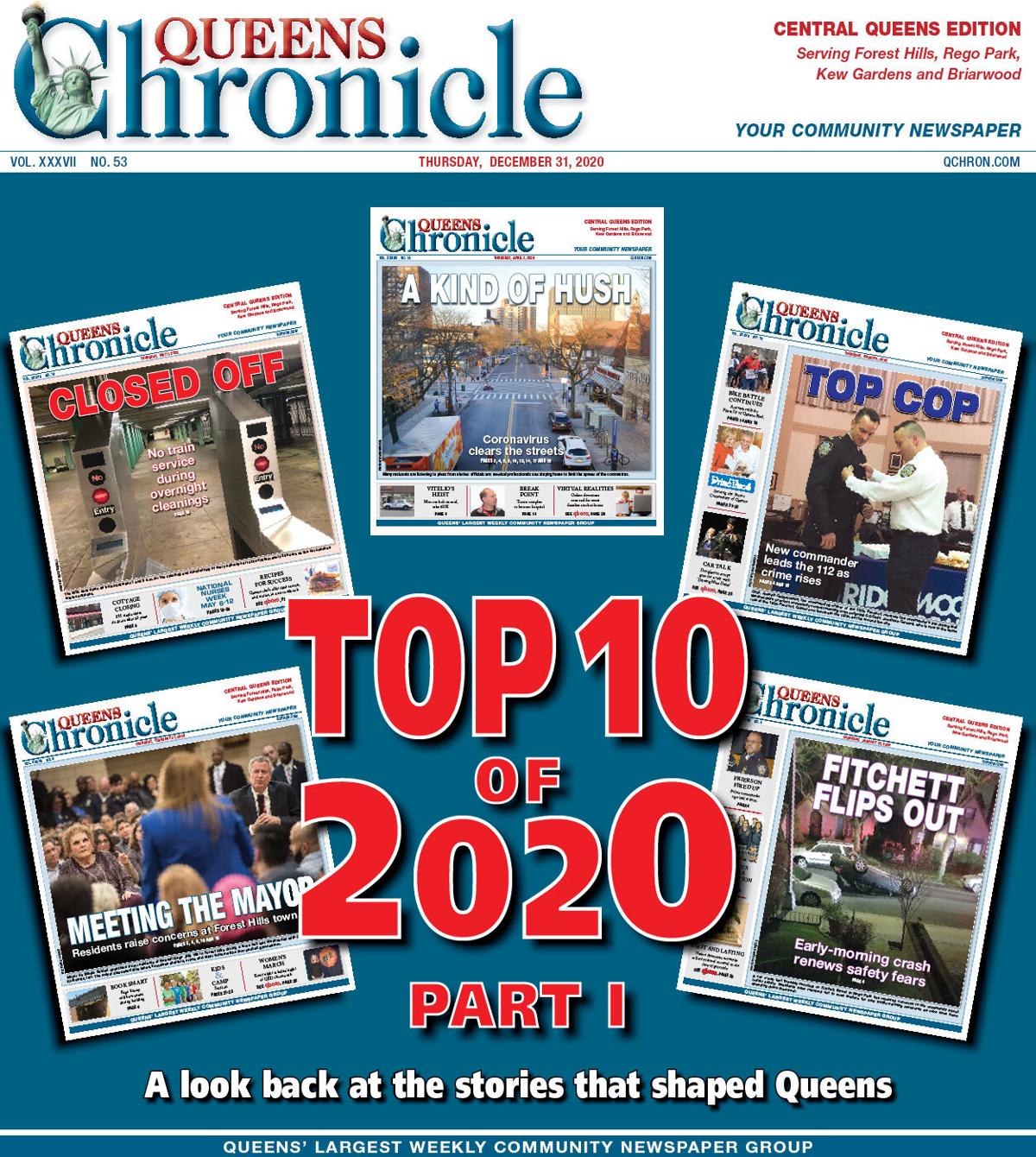 Protesters rallied against police brutality following the killing of George Floyd by Minneapolis police in late May. Forest Hills saw a number of peaceful protests, unlike others that took place around the city and country.

Even on a Sunday afternoon in the spring, Queens Boulevard remained largely quiet because of restrictions meant to limit the spread of Covid.

As 2020 began, a half-dozen candidates looking to become borough president debated each other after Melinda Katz became district attorney following six years in the position. Mayor de Blasio spoke at a town hall in Forest Hills, answering questions from members of the audience about homeless shelters, schools and crime. A plan to change bus routes all over Queens was the subject of great controversy and many meetings.

The pandemic brought the world to a stop in mid-March. Queens became the epicenter as hospitals were swamped and nonessential businesses were forced to close. Many never reopened. Later on, Forest Hills was the site of protests against police brutality following the killing of George Floyd at the hands of Minneapolis police. The Black Lives Matter protests held in the area were peaceful.

It was an eventful year.

Outraged parents opposing the Department of Education’s plan to diversify middle schools in District 28 voiced their objections at a forum in Briarwood. Supporters of the plan accused the other side of racism. The city had granted District 28 $200,000 to draw up desegregation plans for schools in Forest Hills, Kew Gardens, Rego Park and Jamaica.

Katz became the borough’s top prosecutor after six years as borough president. The first female DA in the history of the county, she said at her inauguration that she “was elected because of the trust that I will bring a steady hand in these times of uncertainty.”

Community members rallied at MacDonald Park after a string of anti-Semitic attacks on Jewish citizens in the city during Chanukah.

A car flipped over on Fitchett Street in Rego Park early one morning. Some residents called the area the “Fitchett Street Speedway.” After receiving a number of complaints about the area, the Department of Transportation has a speed hump in the queue for installation.

NYPD Assistant Chief Galen Frierson, commanding officer of Patrol Borough Queens North, told residents to “hold our politicians’ feet to the flame” if they were unhappy about recently implemented bail reforms that saw defendants released for offenses that previously could have kept them off the streets.

The MTA hosted meetings around the borough to discuss its proposal to change bus routes in order to speed rides up.

Reaction wasn’t mixed from lawmakers as all 15 Council members in the borough voiced concerns with the plan in a press release after hearing from residents. Several members staged a rally on the steps of Borough Hall to voice their displeasure with the plan, which would see some routes eliminated and others changed dramatically.

A packed meeting of the Forest Hills Civic Association saw residents speaking out against the bus redesign.

When MTA representatives spoke about the plan to Community Board 6, Councilwoman Karen Koslowitz (D-Forest Hills) called the proposal “unacceptable.”

The mayor said he would consider an alternative idea of the Queens Boulevard bike lanes from Koslowitz, though he later said he was unaware that she had previously presented it to the DOT.

Days later, activists gathered at MacDonald Park in favor of the bike lanes.

At the town hall, de Blasio also announced there would be an annex spot while construction started on a new Rego Park Library and that PS 174 would be expanded by 432 seats.

NYPD Commissioner Dermot Shea, speaking at a forum in St. Albans, said bail reform was the reason crime had been increasing in the city.

Joseph Hennessy, the longtime chairman of Community Board 6, was honored by acting Borough President Sharon Lee during the monthly meeting of the board. His daughter, Sheila, and granddaughter Lana were at the ceremony.

Covid-19 cases were confirmed in the state though Cuomo remained confident in the “best healthcare system in the world” to contain any spread.

But the coronavirus spread rapidly and hit the city hard, with life as normal coming to a halt. Many businesses closed and courts shut down.

Gyms, movie theaters and casinos closed. Schools shifted to a remote learning model. Restaurants and bars were limited to takeout and deliveries.

Gatherings of more than 50 people were banned as social distancing was encouraged to limit the spread of the virus.

Katz tested positive for the coronavirus and quarantined at her home.

Two men cut a hole in the roof and stole $10,000 from Vitelio’s Marketplace on Yellowstone Boulevard in Forest Hills.

Lenin Fierro of Forest Hills became the first Department of Citywide Administrative Services employee to die from Covid. The 42-year-old is survived by a wife and two daughters.

Gov. Cuomo ordered residents to wear face masks in public to limit the spread of the coronavirus.

Det. Raymond Abear of the Queens Special Victims Squad died from the coronavirus. The 43-year-old had joined the NYPD in 2001.

Hennessy, 82, died from complications of the virus.

Religious and political leaders held an online prayer vigil over the crisis, with many of the clergy showing inspirational images as they were speaking.

Cuomo canceled the nonpartisan special election for borough president, knocking Quinn off the ballot. The retired prosecutor was not on a primary ballot.

The MTA began its shutdown of all trains between 1 and 5 a.m. to allow for the cleaning and disinfecting of every subway car in the system every 24 hours.

Cuomo announced the state’s schools and colleges would remain shut through the end of the academic year due to Covid, continuing the shutdown that had been set to expire May 15. De Blasio had previously announced that the city would rely on remote learning through the end of the school year, though Cuomo said that was the mayor’s “opinion” and that he had the power to make decisions on a statewide basis.

The DA announced that suicide rates had “soared” during the pandemic, with 16 in the borough between March 15 and April 28, twice as many as the same period in 2019.

Two popular eateries in the area announced they would not reopen even after the coronavirus crisis ended.

The Irish Cottage on 72nd Avenue in Forest Hills closed its doors after 60 years in business. Longtime owner Kathleen McNulty died from the coronavirus and the family made the decision to not continue. The bar and restaurant would later reopen under new management as The Cottage.

Woodhaven House at 63-98 Woodhaven Blvd. in Rego Park announced it was not financially possible to continue. The restaurant had been in business since 2004.

Joel Ascher, who coached the August Martin girls’ basketball team to 12 city titles and four state championships, died of a heart attack in his Rego Park home. He was 83.

Forest Hills saw protests against police brutality held following the death of George Floyd in Minneapolis in late May.

One activist speaking of her 90-year-old father, said, “It’s so sad that his last few days or years here, he’s having to relive what he lived coming from the Jim Crow South in Tennessee.”

The protests were peaceful, unlike others around the city and country.

Early in the month, the city began its phase one reopening of businesses not deemed essential during the crisis. Retailers, wholesalers, manufacturers and construction companies were allowed to resume operations while complying with mask-wearing and social distancing rules.

The death of longtime Forest Hills resident Herb Stempel, 93, was announced. Stempel’s story of winning on rigged TV game shows in the 1950s, before losing and blowing the whistle on the industry, was told in the 1994 movie “Quiz Show.”

Chris Collett, president of the Forest Hills Civic Association and a member of CB 6, died at 69.

On a lighter note, two nurses were married after postponing their wedding because of the coronavirus. Vanessa Baral of Long Island Jewish-Forest Hills Northwell Health and Herwyn Silva of Lenox Hill Hospital were married on NBC’s “Today” show with Hoda Kotb officiating.