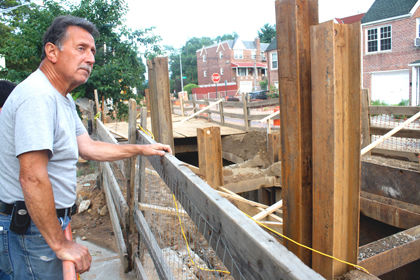 Ben Geremia and a number of his neighbors along Calamus Avenue in Maspeth have had enough. They say the four-year, on again, off again sewer project on their street has not only damaged multiple homes, but has flooded basements and made tap water undrinkable. According to Geremia, legal action against CAC Industries, the company doing the work, could be next. 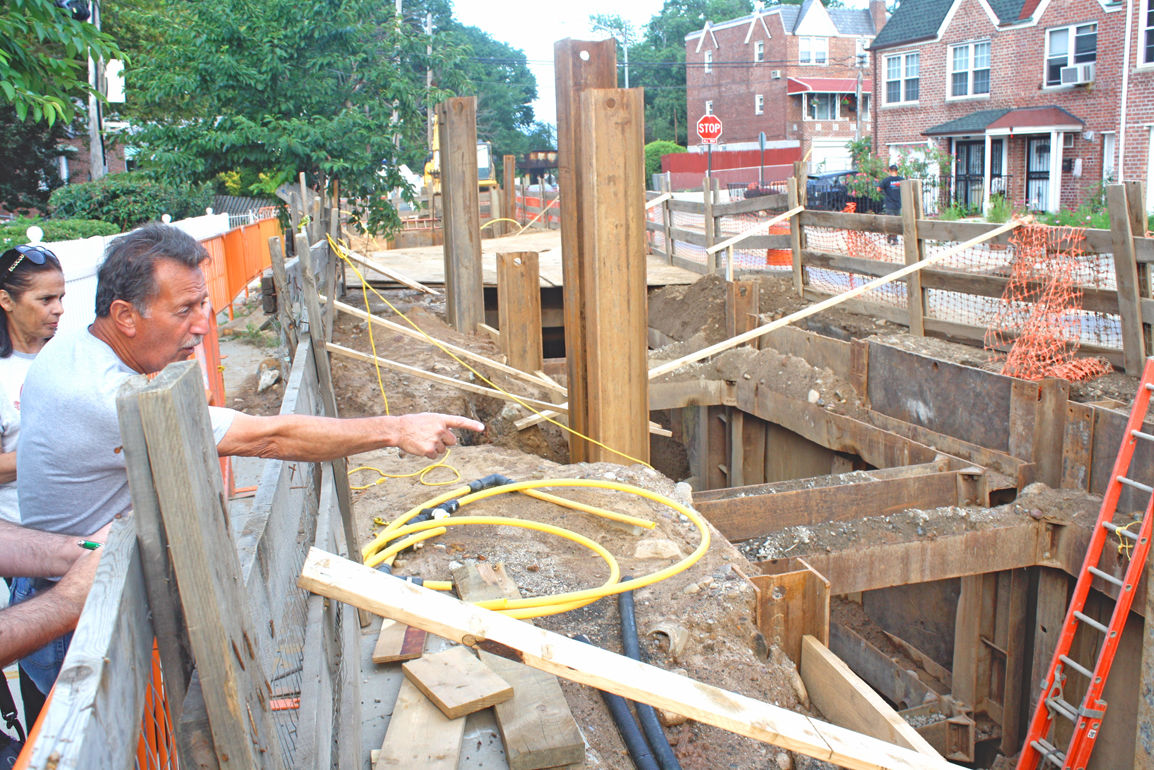 With Antonia Guillen looking on behind him, Ben Geremia points toward the sewer lines being installed on Calamus Avenue. The project has caused numerous problems on the block. 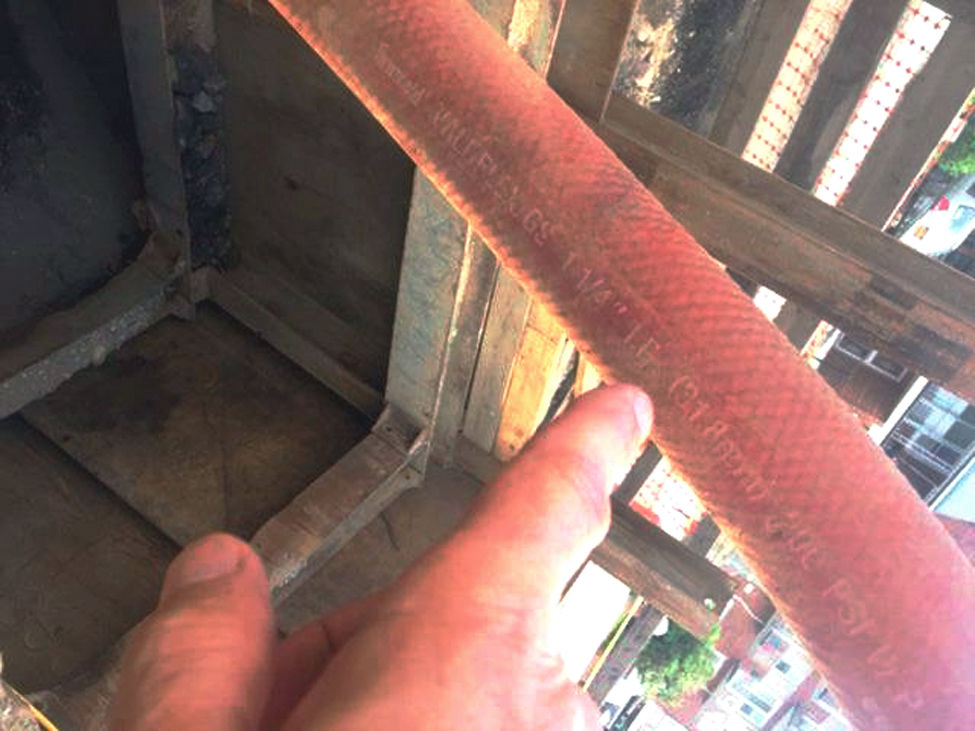 This hose is not made for drinking water but was installed for just that.

Ben Geremia and a number of his neighbors along Calamus Avenue in Maspeth have had enough. They say the four-year, on again, off again sewer project on their street has not only damaged multiple homes, but has flooded basements and made tap water undrinkable. According to Geremia, legal action against CAC Industries, the company doing the work, could be next.

With Antonia Guillen looking on behind him, Ben Geremia points toward the sewer lines being installed on Calamus Avenue. The project has caused numerous problems on the block.

This hose is not made for drinking water but was installed for just that.

It’s been two years since Ben Geremia retired from his job with Verizon, but the handyman has never been busier.

He takes daily walks down Calamus Avenue, where he’s lived since 1961, supervising the extensive, often problematic sewer project that’s ripped up his street.

In between questioning workers on their tasks for the day, he meets constantly with his neighbors who show him the cracks in their driveways, the damage to their homes and the flooding in their basement, supposedly caused by vibrations from the project.

His past professional experience with wires, cables and other infrastructure has made him the neighborhood’s go-to guy when it comes to simplifying construction work into laymen’s terms — something that’s become a full-time occupation.

But unlike his job at Verizon, there’s no biweekly paycheck or benefits.

And as each day passes, those feelings just get stronger and stronger.

“What they’ve done here, it’s criminal,” Geremia said, pointing to the construction equipment and vehicles up and down his block. “We can’t take it anymore.”

The $25 million project to increase sewer capacity and reduce flooding along Calamus between 69th and 74th streets was first announced in March 2014, with an estimated completion date of fall 2016.

The project stalled last February while the Department of Design and Construction redesigned the plan, with sewer installation starting up again in January.

The last seven months have brought a number of serious issues, but Geremia said problems with the project — and contractor CAC Industries — have existed since the shovels first hit the dirt.

While inspecting the work site two years ago, Geremia said he took a close look at the temporary hoses installed by CAC to carry water between the infrastructure below the street and a number of homes, including his.

“That hose didn’t look like something I really wanted to be drinking out of,” he said. “So I called up the manufacturer and asked.”

The hose in question is suitable for watering plants and industrial uses, but not for drinking, according to an email from an employee of Thermoid — the manufacturer of the hose — obtained by the Chronicle.

A furious Geremia said he immediately questioned workers on the job site and demanded the hoses be changed out, which they were shortly after.

But the replacement hoses weren’t much better, he said, as the tap water now gave off a pungent plastic odor — and equally as gross a taste.

“They can put whatever the hell they want in there and nobody cares,” he said. “I guess they’ve worked with the city so long that they get along well and no one gives a s--t about anyone else.”

The third set of hoses have posed no problems in recent months, as worries over them have been replaced with anger over damage to homes supposedly caused by the project’s vibrations.

Geremia and neighbor Antonia Guillen toured the Chronicle and another reporter around the neighborhood on Tuesday night, pointing out dozens of cracks along driveways, walkways, steps and porches.

One of the most impacted homes belongs to Jimmy Wu, who moved to the block earlier this year.

Guillen said Wu spent months renovating his front yard and the exterior of his home, but it’s all been for naught.

With his niece translating for him, Wu pointed to holes in between the bricks of his walkway, lengthy cracks in his living room wall and a flooded basement closet, saying none of that existed when he moved into the house.

Wu and Guillen were two of a number of residents along the block who tried to file claims with their homeowners insurance companies.

They’ve all been unsuccessful, however. Guillen said she was told that losses stemming from “earth movement” are not covered.

“I’ve never seen anything as catastrophic, and I’ve been in two earthquakes,” said Guillen, a former Los Angeles resident. “This is a nightmare.”

Led by another neighbor, David Lee, a group of Calamus Avenue residents met earlier this week to discuss their options.

One potential step, Lee said, would be filing a lawsuit against CAC in an effort to be compensated for the damage.

“That’s not out of the question,” Lee said in an interview. “We’re going to try and band together and make something out of this.”

Both Guillen and Geremia spoke favorably of a possible lawsuit, with the latter saying it appears to be the only option remaining for angry residents.

“Someone’s got to get sued,” Geremia said, with Guillen adding the search for a lawyer is getting underway.

Councilwoman Elizabeth Crowley (D-Glendale) and a spokesman for city Comptroller Scott Stringer said residents with damage to their property should report it to CAC as soon as possible.

“The company contracted with the city on this project is responsible for fixing any and all damages,” Crowley said in a statement. “All homeowners should document and report their damages to both the company and the city.”

CAC did not immediately respond to a request for comment by press time.

But in the end, all Guillen wants is for someone to take responsibility.

“No one cares,” she said. “There have been no changes and no one knows what to do.”