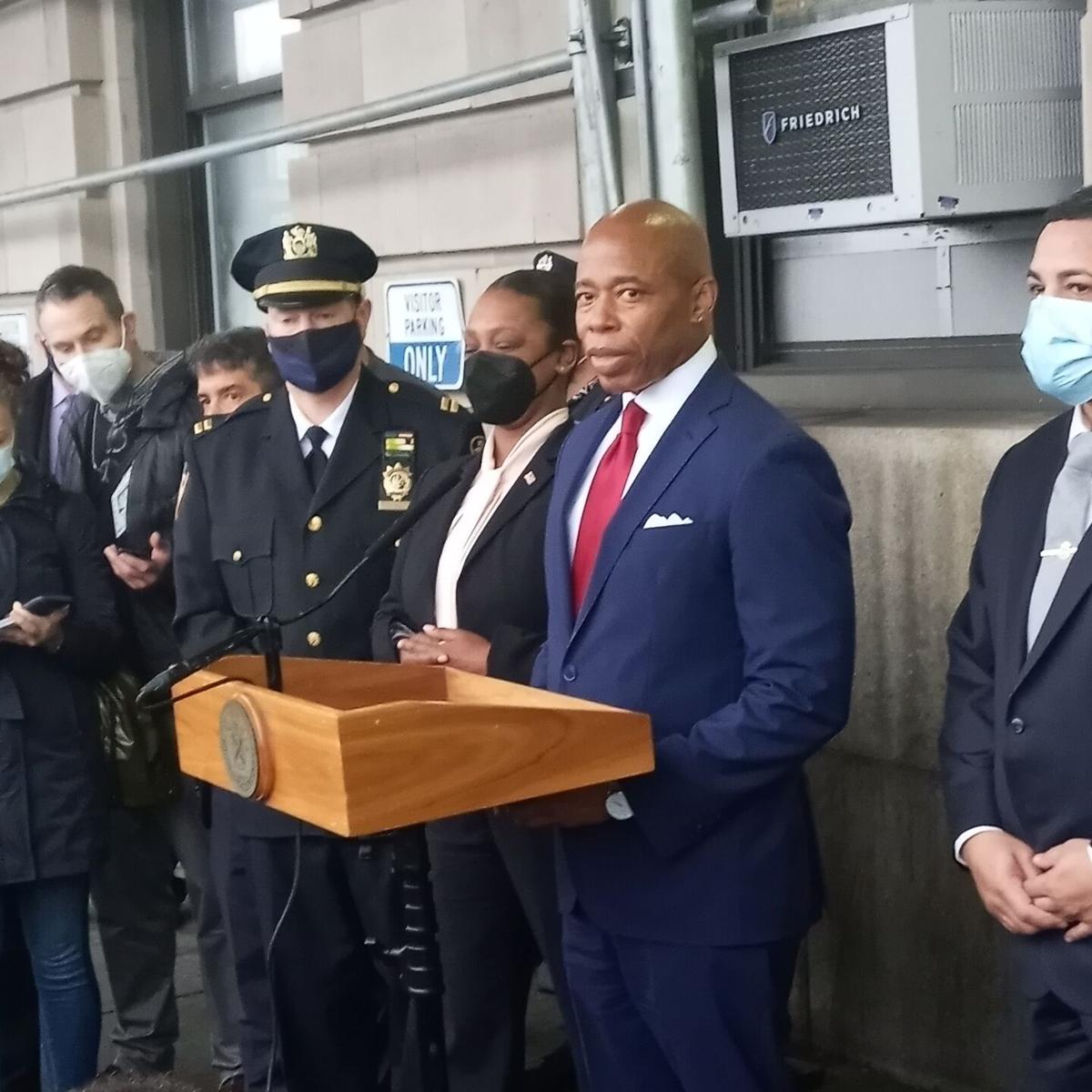 Mayor Adams and NYPD Commissioner Keechant Sewell attended roll call in the 103rd Precinct in Jamaica on Saturday, not 12 quite hours after the former police captain was sworn into office. 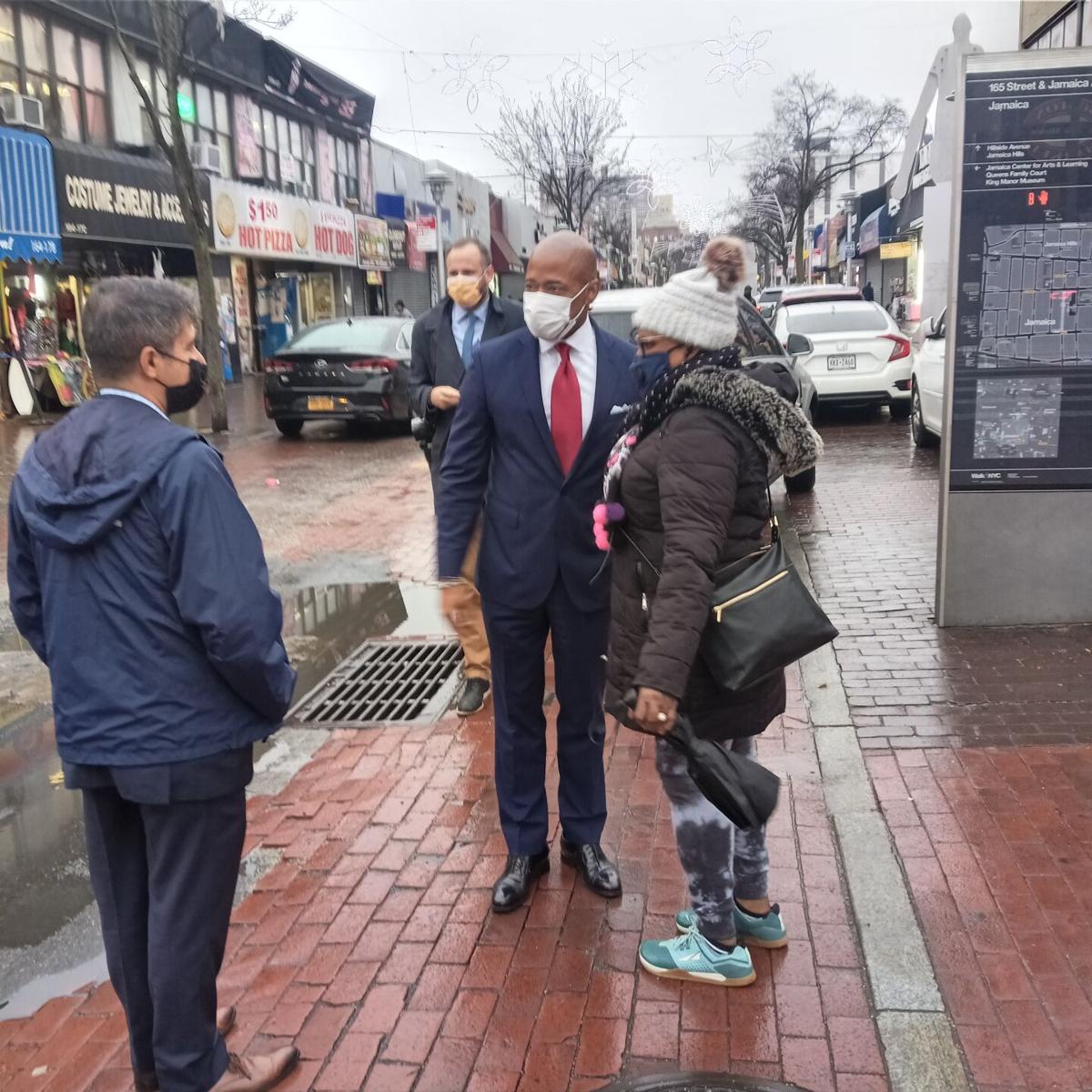 Mayor Adams followed his visit to Jamaica's 103rd Precinct with a meet-and-greet stroll along Jamaica Avenue.

Mayor Adams and NYPD Commissioner Keechant Sewell attended roll call in the 103rd Precinct in Jamaica on Saturday, not 12 quite hours after the former police captain was sworn into office.

Mayor Adams followed his visit to Jamaica's 103rd Precinct with a meet-and-greet stroll along Jamaica Avenue.

Mayor Adams and NYPD Commissioner Keechant Sewell on Saturday afternoon made the 103rd Precinct in Jamaica one of the first stops of Adams’ mayoralty.

Adams had planned the visit, though his schedule had an unanticipated detour to a hospital in Harlem on Saturday morning when an off-duty police officer was shot in the parking lot of the 25th Precinct.

Adams, accompanied by Sewell, new First Deputy Commissioner Edward Caban and Councilwoman Nantasha Williams (D-St. Albans) attended roll call and spoke with the officers about to head out to the streets of Jamaica.

And the former NYPD captain said the location was very deliberate.

“There is probably no more significant a visit for this historical journey than coming to the 103rd Precinct,” Adams said.

“You know my story,” he said. “This is the precinct where I was arrested and beat as a child. And to return here and address a roll call with a group of mostly young officers, and send a very clear and loud message that the commissioner, the deputy commissioner and I want to tell out police officers. We have their backs. We have their backs to do their job.

“But there is a covenant that we are establishing ... a covenant where we will give them the tools and support they need. But we also are going to hold them to a high standard. We’re not allowing abusive officers to remain in our ranks ...

He acknowledged there was lasting trauma going back to the building during his campaign and going inside on Saturday, but that it was necessary for him.

“I have left that demon on these streets ... back as the mayor in charge of the entire police department.”

Adams said Williams and other elected officials will be important partners, as they are closest to any problems that need addressing.

“My commissioners will return their phone calls,” he said.

During a question-and-answer session he said Covid must be tackled head-on, but without having the city live in fear. He said the bulk of Saturday was spent with his executive team focusing on Covid in general and what it means with reopening schools Monday and getting the city’s economy on track.

“Covid is front and center,” he said. “We’ve spent $11 trillion and it’s still here. We can’t spend another $11 trillion. We can’t close down the city every time there’s a new variant. We can’t allow our children to keep missing school because a new variant comes about. Covid won’t control us. We’re not going to live in fear. We’re going to have a city that’s open, that’s safe and that’s protecting families.”

He sad there are sane, commonsense alternatives to states in the South that go easy on vaccinations, masks and other remedies.

“Let’s be smart and principled,” he said. “But we have to live our lives. Use masks. Wash our hands. Get vaccinated and get booster shots. But we can’t lose our economy. That is as dangerous as Covid.”

On other matters, Adams said he has some difficulties with legislation that will, among other things, allow people who life in the city as little as 30 days vote in municipal elections.

“To give that power to someone who has been here only 30 days, that’s a problem,” he said.

He also said the days of someone stealing something from a store shelf and walking out without a police response are over; but he also said police should be able to access government and social agencies if the theft has to do with mental health, poverty, homelessness or some other issue.

“If those people accept the help, we can defer prosecution,” he said. He also suggested stepping up dyslexia screenings, saying 30 percent of the city’s inmates have been diagnosed with the learning disability.

Tom Grech, president and CEO of the Queens Chamber of Commerce, also was in attendance and gave Adams high marks.

“He’s a terrific mayor and it’s only been 12 hours,” Grech said. “The first thing he talked after roll call was helping businesses an Jamaica Avenue and Sutphin Boulevard; helping the [business improvement districts].”