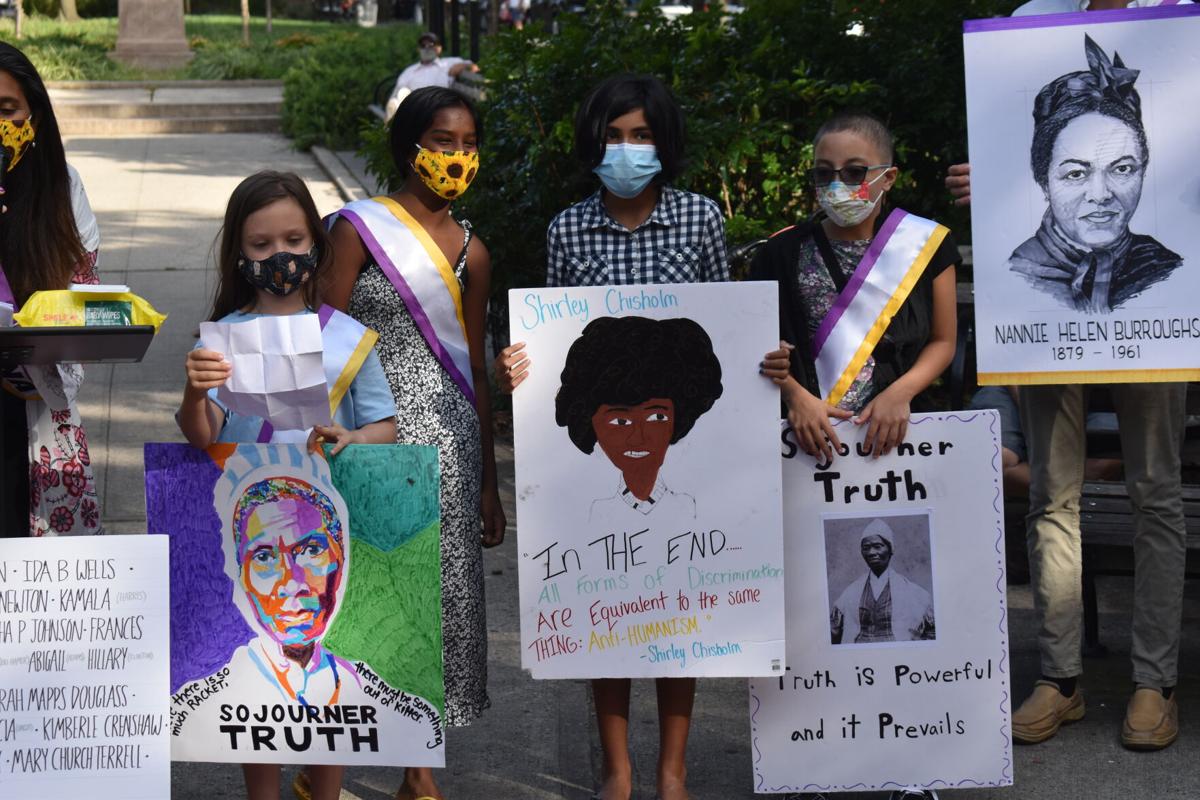 Children read the names of suffragettes during Wednesday's centennial celebration of the ratification of the Nineteenth Amendment, allowing white women to vote. 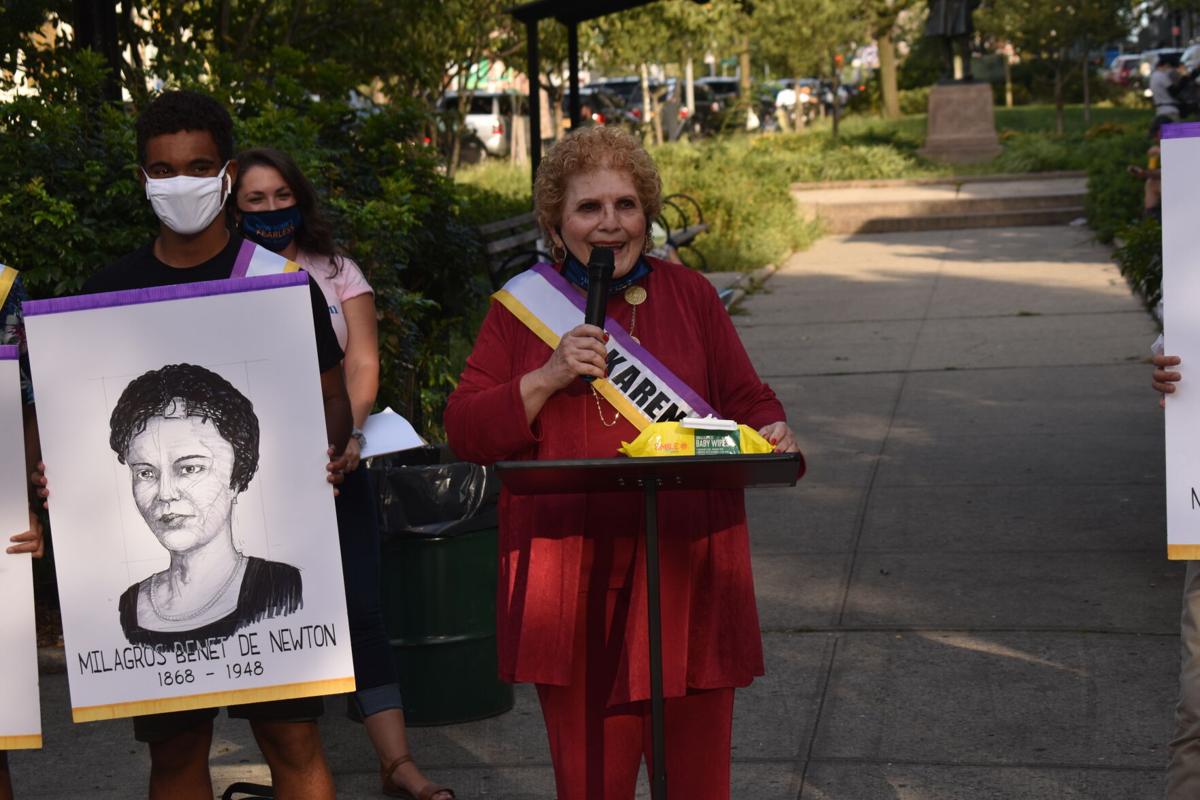 Councilwoman Karen Koslowitz recalled how an opponent used her divorce as campaign fodder. 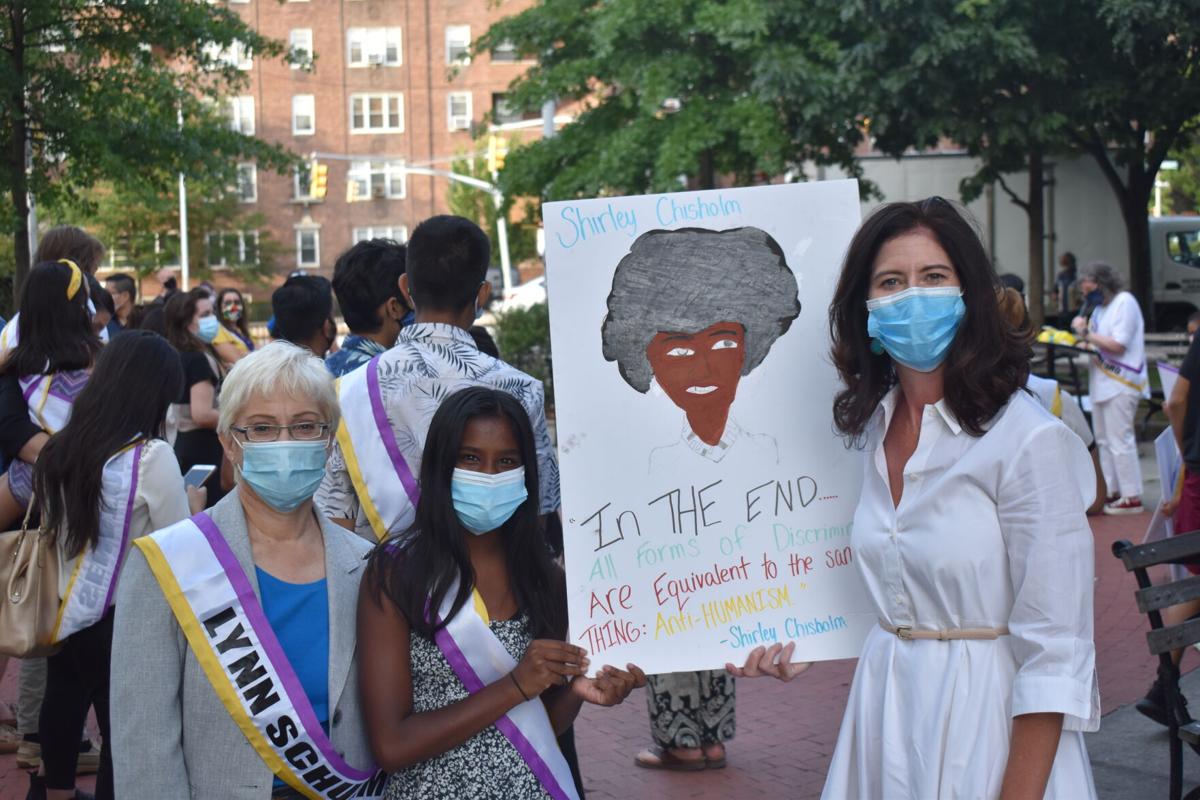 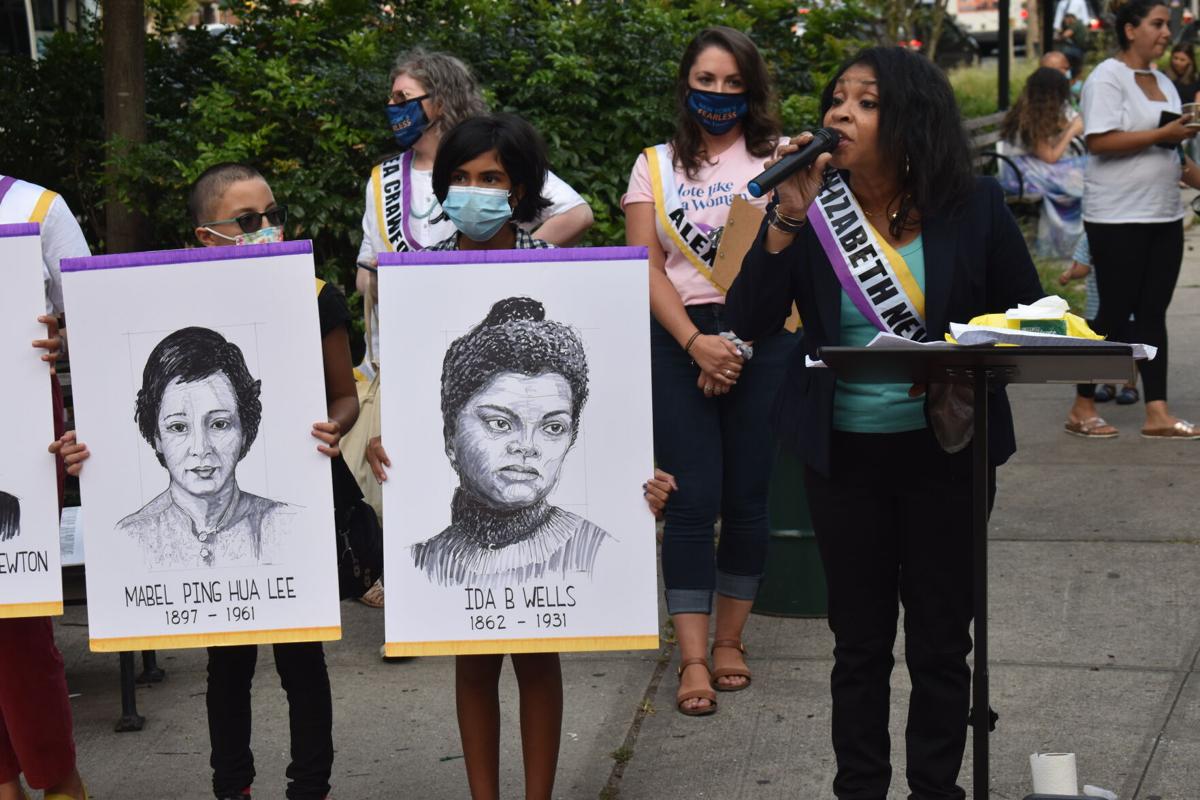 Elizabeth Newton of the Legal Aid Society spoke about the diversity of the suffragettes and read Sojourner Truth's "Aint' I a Woman?" speech that Truth delivered at the Women's Convention in Ohio in 1851.

Children read the names of suffragettes during Wednesday's centennial celebration of the ratification of the Nineteenth Amendment, allowing white women to vote.

Councilwoman Karen Koslowitz recalled how an opponent used her divorce as campaign fodder.

Elizabeth Newton of the Legal Aid Society spoke about the diversity of the suffragettes and read Sojourner Truth's "Aint' I a Woman?" speech that Truth delivered at the Women's Convention in Ohio in 1851.

In August 1920, the Nineteenth Amendment to the Constitution was ratified, giving women the right to vote.

On Wednesday, Women’s Equality Day, the community celebrated the centennial at MacDonald Park in Forest Hills, while also noting how it was for white women only.

“People use the phrase, ‘We got the right to vote.’ To me, that’s insulting,” said state Sen. Toby Ann Stavisky (D-Flushing). “We didn’t get that right. We took it, we earned it, we fought for it, we demonstrated for it.”

She added that other women could not cast ballots until the Voting Rights Act was passed in 1965.

“How terrible is this? We didn’t get rid of slavery with the Civil War and the amendment in 1865,” Stavisky said. “It took until the 1950s and 1960s until segregation became part of history. And it still exists today.”

Aleda Gagarin, senior director of development at Candid, a nonprofit that connects people with resources, spoke on the people of color being excluded.

“What the centennial of what my right to vote means is 100 years of white women upholding white supremacy,” she said. “Leaving out black women was not an accident.”

Gagarin read a quote from Belle Kearney, a lobbyist for the women’s suffrage movement who said allowing white woman to vote would secure “immediate and durable white supremacy honestly attained.”

“In 2016, white women helped elect Donald Trump and we have to look ourselves in the mirror as our neighbors are thrown into vans, into cages and as the suffering continues,” she said.

“All of these women were leaders of the suffrage movement and all of them were lesbians,” said Schulman, who is openly gay. “But in those days they didn’t use the word lesbian. They referred to as women who loved other women, and women who had romantic relationships.”

She said that opponents to the movement would shame them, using stereotyped images in advertisements portraying them as “unfeminine looking man-haters.”

Councilwoman Karen Koslowitz (D-Forest Hills) called it a “disgrace” that women had to wait so long to vote.

She remembered running in the early 1990s to become the first woman to represent the area in the City Council. Her opponent made mention of her divorce “like that was a terrible thing that I was divorced. To me, it was the best thing.”

Jennifer Rajkumar, who recently won her Democratic primary race in Assembly District 38, spoke of her admiration for suffragettes.

“I am in awe of their courage and it is become of them that we’re able to vote,” she said.

State Sen. Jessica Ramos (D-East Elmhurst) said the Nineteenth Amendment was “just the start of suffrage for all people despite so many characteristics and systems and concepts created by our society to keep us divided and not standing with each other on the  issues that matter most.”

She also criticized Abby Johnson, a speaker at the Republican National Convention, who has advocated for policies that would bar women from voting.

Ramos said it was embarrassing and dangerous. “That woman believes not everyone has an equal voice,” she said.

Elizabeth Newton of the Legal Aid Society remembered the diversity of the pioneers who were not even able to vote despite helping the cause, women such as Mabel Ping-Hua Lee, a Chinese advocate.

“She was only 16 years old and she was well-known for her advocacy for the right to vote although she could not vote because of the Chinese Exclusion Act,” Newton said.

There was Milagros Benet de Mewton, a Puerto Rican suffragist.

Gertrude Simmons Bonnin, known as Zitkala-Sa, a Native-American who fought for civil rights.

She also remembered several African-American suffragettes, including Sojourner Truth. Newton read Truth’s “Ain’t I a Woman?” speech that Truth delivered at the Women’s Convention in Ohio in 1851.

The speech included, “That man over there says that women need to be helped into carriages, and lifted over ditches, and to have the best place everywhere. Nobody ever helps me into carriages, or over mud-puddles, or gives me any best place. And ain’t I a woman?”

Newton also spoke on what the Nineteenth Amendment means to her.

“It means unity to me,” she said. “It means that no matter what we look like or where we come from we must unite for justice.”