You are the owner of this article.
Edit Article Add New Article
You have permission to edit this article.
Edit
News
Editions
Opinion
qboro: Arts
Photos
School News
Classifieds
About Us
Sections
Digital Edition
Page One
Sports
1 of 3 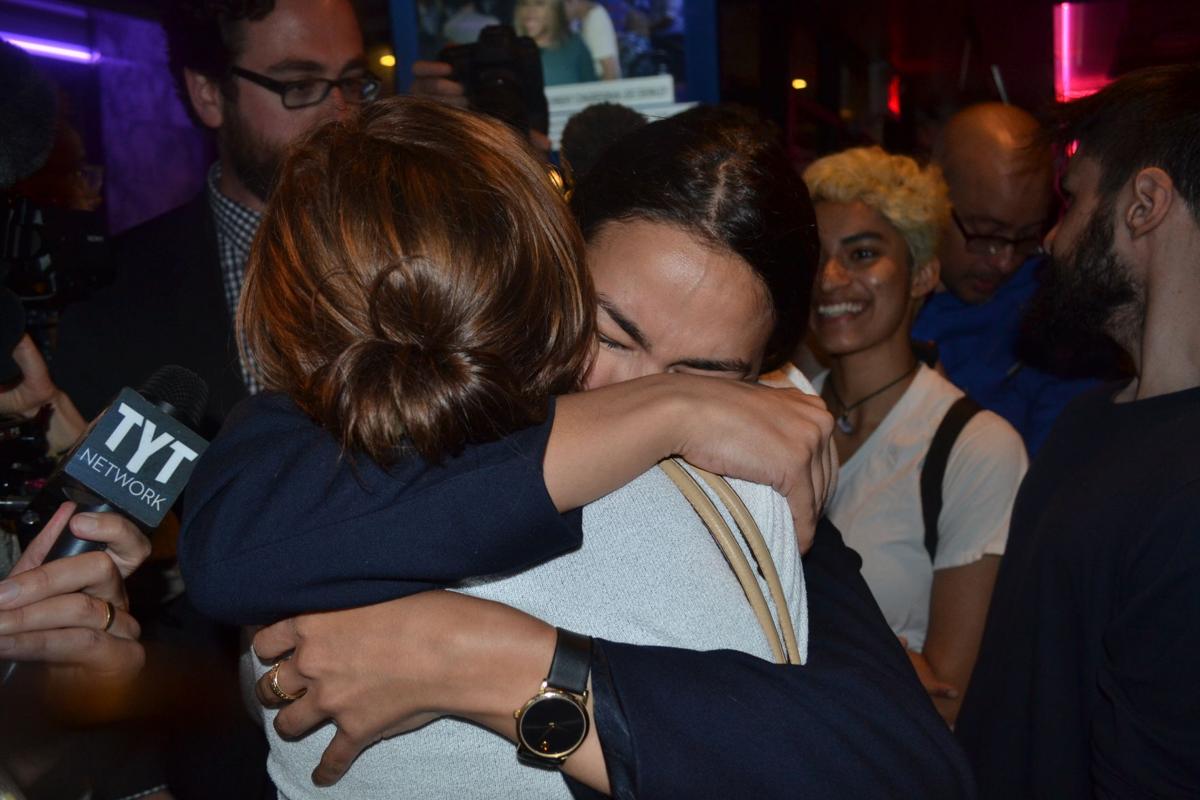 Alexandria Ocasio-Cortez cries into her mother’s shoulder after pulling off one of the most historic upsets in recent political history — defeating Rep. Joe Crowley, the House Democratic Caucus chairman, by 15 percentage points in Tuesday’s Democratic primary. 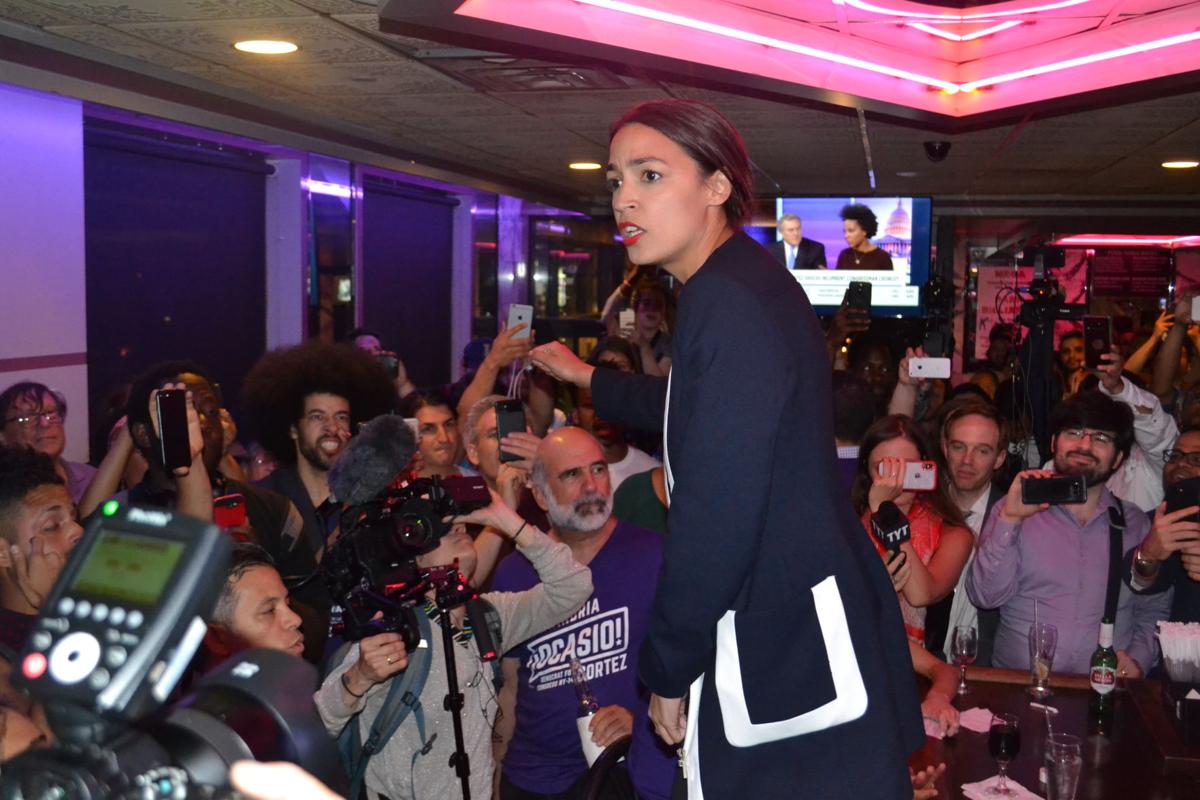 Ocasio-Cortez, standing on a bartop at her election night victory party in the Bronx, implores her joyous supporters to get behind other like-minded Congressional candidates, calling for a nationwide movement. 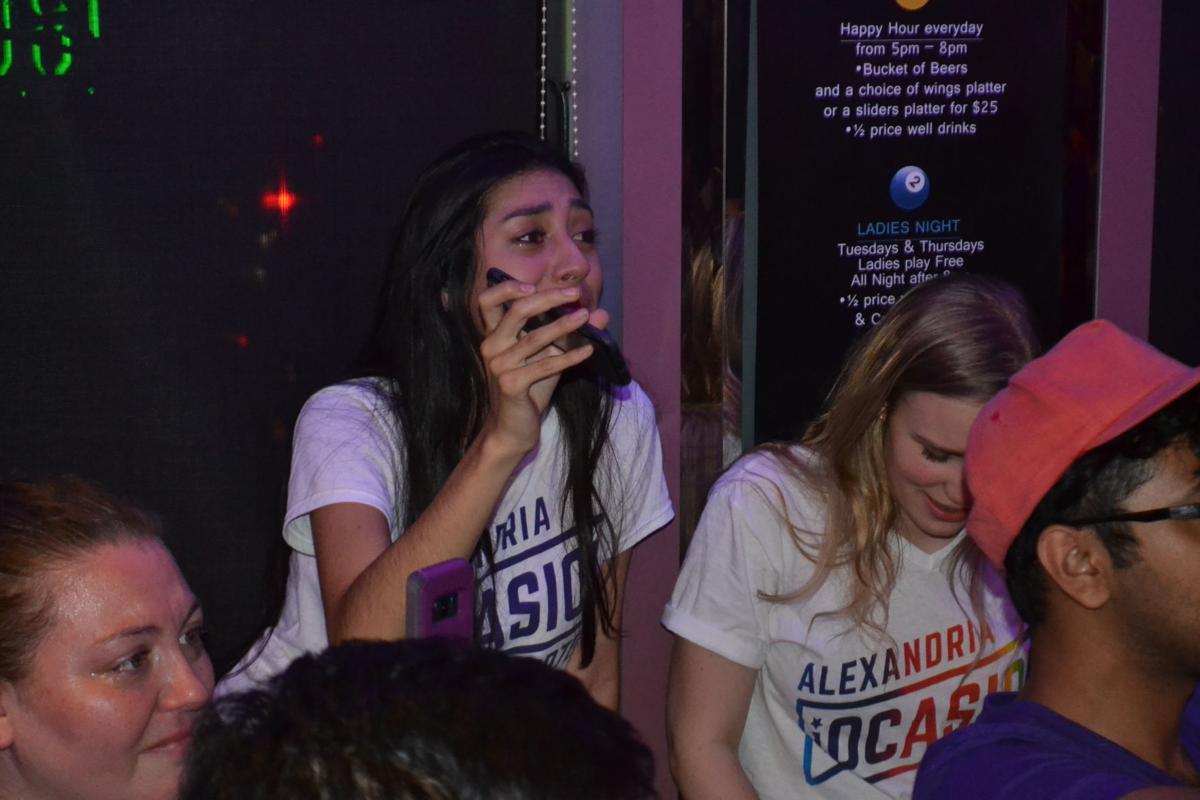 Some of Ocasio-Cortez supporters, like this woman, could be seen openly weeping during the candidate’s victory speech on Tuesday night.

Alexandria Ocasio-Cortez cries into her mother’s shoulder after pulling off one of the most historic upsets in recent political history — defeating Rep. Joe Crowley, the House Democratic Caucus chairman, by 15 percentage points in Tuesday’s Democratic primary.

Ocasio-Cortez, standing on a bartop at her election night victory party in the Bronx, implores her joyous supporters to get behind other like-minded Congressional candidates, calling for a nationwide movement.

Some of Ocasio-Cortez supporters, like this woman, could be seen openly weeping during the candidate’s victory speech on Tuesday night.

If you log onto the website of Manhattan tequila bar Flats Fix, looking back at you will be a year-old picture of Alexandria Ocasio-Cortez shaking a cocktail with one hand and grabbing a glass with the other.

In that image, the 28-year-old Bronx resident’s mind appears to be elsewhere. And she has said since that it constantly was.

In between shifts behind the bar or waiting tables, Ocasio-Cortez was mapping out a seemingly far-fetched, nearly impossible run for Congress against Rep. Joe Crowley (D-Queens, Bronx) — the longtime titan of New York City politics and massively influential boss of the Queens Democratic Party.

One year later, her cocktail-making days officially became a thing of the past.

On Tuesday, quite simply, she made history.

In one of the more monumental upsets of an incumbent lawmaker in recent American history, Ocasio-Cortez — the insurgent leader of what ultimately became a powerful grassroots campaign against what she called the corrupt status quo — crushed Crowley by double digits in the 14th Congressional District’s Democratic primary.

Should she prevail in November’s general election — a near certainty — she will become the youngest woman ever elected to Congress.

The race was called in Ocasio-Cortez’s favor shortly before 10 p.m., sending her approximately 100 supporters gathered at an election party inside a Bronx pool hall into a state of euphoria.

Some people jumped up and down. Others chanted “A-O-C! A-O-C!” A number of people could even be seen openly weeping tears of joy.

Standing on the pool hall’s bar top, Ocasio-Cortez triumphantly told her joyous backers that the victory was not hers alone. Instead, it belonged to anyone and everyone who gave so much as five minutes of their time to the campaign.

“Every person here this evening changed America tonight,” Ocasio-Cortez said to thunderous applause. “You have given this country proof that when you knock on your neighbor’s door; when you come to them with love; when you let them know that you’re there for them, we can make change.”

With 96 percent of the vote counted as of Wednesday afternoon, Ocasio-Cortez led Crowley 57 percent to 42 percent — 15,897 votes for the challenger to 11,761 for the incumbent.

In Queens, where Crowley has been Democratic party chairman for more than a decade, his margin of defeat was even larger.

Ocasio-Cortez picked up 58 percent of the vote to Crowley’s 40 percent in the borough — securing 11,084 votes to his 8,220 — coming away with resounding margins in neighborhoods like Astoria, Woodside, Sunnyside, Jackson Heights and College Point.

Astoria ended up being her best performing area in Queens, as she won 2,474 votes to Crowley’s 1,027. The incumbent, meanwhile, did well in East Elmhurst, where he beat Ocasio-Cortez by about 800 votes.

In the Bronx, the challenger’s home borough, Crowley lost by seven percentage points — a little over 500 votes.

Despite the national media attention around the race, turnout was low, as only 13 percent of the 214,570 registered Democrats in the district voted on Tuesday.

However, Ocasio-Cortez labeled her commanding victory a warning shot across the bow of Democratic lawmakers nationwide who don’t take progressives in their districts seriously.

“What we proved tonight is that sometimes, in the deep darkness of our political environment, that there is still hope for this nation. That is what you have given every person in this country.”

She also implored her backers to immediately support fellow progressives like herself running all across the country in order to “introduce a wave of change.”

“Let’s celebrate tonight and then let’s recommit ourselves to the future of this great nation,” she said. “Thank you all.”

Waiting for Ocasio-Cortez next to the bar was her mother, Blanca. After the challenger’s victory speech, the two emotionally embraced, crying into each other’s shoulders.

In an interview with the Chronicle shortly after, Ocasio-Cortez said she wasn’t sure she would be able to process her stunning win for months.

”My family went through so much. My mother cleaned houses and drove schoolbuses. Nine months ago, I was serving customers at a restaurant,” she said. “What this means for her and my family, all the struggles we went through, there’s light at the end of it.”

“This was a long time coming. I just told her I believed in her,” Ocasio-Cortez’s mother told the Chronicle. “I’m extremely proud. I can’t even find the words to describe exactly how I feel. It’s amazing.”

In early May, Ocasio-Cortez said in an interview with the Chronicle that she would consider getting 40 percent of the vote a major victory. But in the days leading up to the primary, the candidate and some of her supporters told the paper that winning outright looked entirely possible, if not likely.

Asked Tuesday if she ever thought she would win by double dights, however, Ocasio-Cortez admitted even she was stunned.

At his election party in Jackson Heights, Crowley conceded the race to Ocasio-Cortez around 10 p.m., promising to support her general election bid against little-known Republican candidate Anthony Pappas — a St. John’s University professor.

“It has been the honor of a lifetime to represent Queens and the Bronx. I am proud of the race we ran and, more importantly, proud of all of the work we’ve done to advance this community,” Crowley said. “I want to congratulate Alexandria Ocasio-Cortez. I look forward to supporting her and all Democrats this November. The Trump administration is a threat to everything we stand for here in Queens and the Bronx, and if we don’t win back the House this November, we will lose the nation we love.”

Crowley, who is also a musician, even picked up a guitar and played Bruce Springsteen’s legendary hit “Born to Run” in Ocasio-Cortez’s honor with the band he had at the election party.

Crowley was first elected to Congress in 1999, eventually rising through the ranks to become the House Democratic Caucus leader.

Should he have won on Tuesday — and if Democrats were to win back the House in November — he was seen as a top contender to become chamber speaker.

But Ocasio-Cortez, a first-time candidate, ran a spirited campaign over the last year, declaring that a district complete with multiple, thriving immigrant communities needed a representative who not only looks like them, but has shared their struggles.

She also repeatedly hit Crowley over his ties to Wall Street and corporate donors, while pledging herself to never accept money from political action committees or corporate interests.

Crowley, meanwhile, tried to paint his opponent as too inexperienced, while portraying himself as the candidate to best take on President Trump.

A darling of the progressive left, Ocasio-Cortez campaigned on liberal principals championed by U.S. Sen. Bernie Sanders (I-Vt.) —  she volunteered on his 2016 presidential campaign — such as tuition-free college, Medicare for all and a federal jobs guarantee.

She’s also been outspoken about abolishing Immigration and Customs Enforcement, even traveling to Texas last weekend to protest outside a migrant detention center with a number of activist groups.

Her victory is arguably the biggest in the history of both the Democratic Socialists of America and the Sanders-inspired progressive group Our Revolution, two organizations that endorsed Ocasio-Cortez.

In her victory speech, she thanked a number of fellow female progressive and DSA-backed candidates by name — including state Senate hopeful Julia Salazar and Boston City Councilor Ayanna Pressley, the Massachusetts congressional candidate who campaigned with her in recent weeks — for helping prove that women, especially women of color, are the future of the Democratic party.

One of those women she mentioned was gubernatorial hopeful Cynthia Nixon, who endorsed Ocasio-Cortez on Monday and was on hand to celebrate the victory.

In an interview with the Chronicle, Nixon said Ocasio-Cortez’s win proved that even the most entrenched Democrats, like Crowley and Gov. Cuomo, are beatable.

“She ran a brilliant campaign, but more importantly, she showed that if you give voters someone they can trust — a new, more progressive member of the Democratic Party — they will vote for them,” Nixon said. “My, how much she deserves this. She must be so thrilled.”

“I think she’ll be a great leader for Queens and the Bronx in Congress,” she continued.

In a Wednesday email, St. John’s University political science professor Brian Browne said it is time to “throw out the rule book” when it comes to elections in the city.

“Ocasio-Cortez portrayed a 20-year incumbent and a rising star in the Democratic leadership as being out of touch with a changing district,” Browne said. “This was unexpected and the political shockwaves will be felt for some time. Queens County politics is changing and Alexandra Ocasio-Cortez has made her name known far beyond the borders of the 14th Congressional District.”

Trump even took to the medium to bash Crowley, celebrating the loss of the “Big Trump Hater.”

“That is a big one that nobody saw happening,” Trump tweeted. “Perhaps he should have been nicer and more respectful to his President!”

Ocasio-Cortez is no fan of Trump, however. Not only did she say on CNN on Wednesday that she supports impeaching the president, she has called a number of his policies “fascist” and “disgusting” over the course of her campaign.

But on Tuesday, neither she nor her supporters spoke much of Trump or the future of his administration.

Instead, it was all about climbing a political mountain that no one thought could be climbed.

Her days of serving drinks behind the bar at Flats Fix are long gone.

Come January, she will almost certainly find herself serving her constituents in Congress instead.

This story has been updated to include more quotes from Ocasio-Cortez, interviews with Cynthia Nixon and Brian Browne and additional background information about the race.